The Ballincollig Tidy Towns Workers were back to work this week after the Christmas and New Year break.

Adrian spent most of Tuesday morning washing the soakage wicks belonging to the Eastgate planters. When this was done, he emptied all the Cig/Gum bins along Main Street.

Bags of litter were collected from both Muskerry Estate and Rosewood Estate. The residents had been busy gathering them over the Christmas period and we thank them for that.

On Wednesday Adrian spent some time working at the Allotment tidying around the area. Afterwards he weeded the bed at Cleburne Mews. The daffodils are already appearing above the ground in many areas around Ballincollig with the promise of Spring.

Adrian, John and Ger removed 5 one-ton bags of leaves from Coolroe Meadows on Thursday and also 10 bags of suckers from the trees. These were then taken to the Allotment for composting.

Again we look at more ways our actions are damaging the planet and small changes can make a difference.

Air pollution is the introduction of chemicals, particulates, or biological materials into the atmosphere which causes discomfort, disease, or death to humans, damages other vital living organisms- such as food crops – and destroys our natural environment. It has been a growing concern over the last decade and is closely linked to climate change. As well as being detrimental to human health, air pollution is also detrimental to life on our planet. We can reduce the instances of disease from stroke, heart disease, lung cancer – and both chronic and acute respiratory diseases – including asthma when we reduce levels of air pollution. Air pollution kills an estimated 7 million annually.

The world’s population continues to increase at a rapid rate while the planet’s temperature is increasing and if we do not take the necessary steps to reduce our pollution rates, the air we breathe will become increasingly more polluted.

Conserve energy by being more mindful of your energy consumption.

Avoid burning grass, leaves, foliage and other materials that are harmful to the air.

Read about the Paris Agreement in order to be better informed of current regulations.

The more we know collectively of the realities of air pollution the bigger the impact we can make.

Back in March 2020 Ballincollig Tidy Towns launched it’s new initiative for a spray free Ballincollig. Despite several lockdowns, both members and workers pushed ahead encouraging several estates to come on board in support. Over the past number of months it has gained traction and this year BTT will work with Cork City Council to bring it over the line.

We can take a look at how the use of pesticides can affect us and the changes we can make to help our planet.

The structure of the planet’s delicate ecosystems is being changed and toxified by pesticides. From insecticides to plant growth regulators, pesticides are wreaking havoc on the environment.

The term pesticide covers a wide range of compounds including; insecticides, fungicides, herbicides (to name a few), plant growth regulators and others. With the current industrial agriculture and the monocropping boom, it is clear why pesticide contamination is on the rise. Unfortunately, studies show over 95% of herbicides and over 98% of insecticides sprayed do not reach the targeted pest. Instead, they end up drifting into water supplies, other farmlands and into people’s homes

Purchasing organic and non-gmo foods will make a huge change to the food climate. With a demand for organic products the need for conventionally grown products declines.

Reduce your consumption of processed foods. Opt for organic whole foods as the majority of boxed/packaged foods contain high amounts of wheat, corn and soy. These crops are grown with monocropping and require high amounts of pesticide regulation.

Reduce pesticide use around the house. Use alternative eco-friendly products.

Make landscapers accountable and opt for eco-friendly companies/individuals to do the work.

There are now 24 bags of plastic ready for Green Dragon to collect for recycling. These bags are as a result of the work our Volunteers put in each week segregating out from the rubbish as they litter pick.

pics from the week’s work 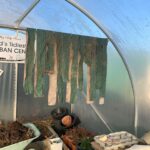 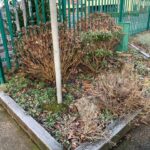 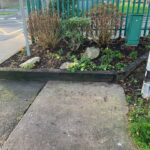 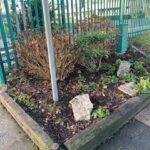 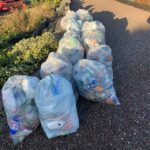 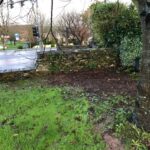 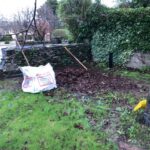 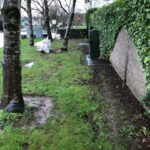