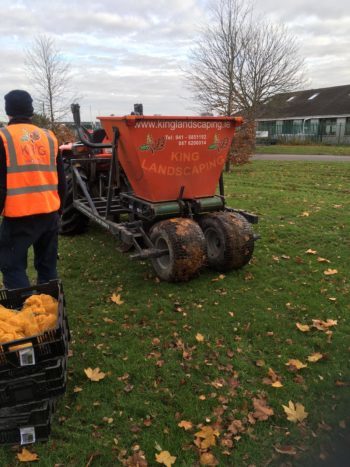 During the week, approximately 120,000 bulbs were planted as part of Cork City Council’s Parks Department plans for 2020. The bulbs were put in a special planting machine similar to one used for planting potatoes. It opens the ground and plants the bulbs as it goes along making the whole process quick and easy.

Planting was done around the car park near the Allotment and on both sides of the footpath that runs through the Regional Park behind the Old Quarter. In addition more planting was done among the pine trees further along the Park. The overall effect should be spectacular.

Last Sunday twenty five Volunteers were out for the weekly Litter Pick. As well as all the usual areas, Carrigrohane to Classis was also covered. Thirteen bags of general waste were collected together with three bags of plastic and two bags of glass. During the week daily Litter Picks were also carried out on Main Street.

Six bags of leaves were collected from Beech Park.

One of the first weekly tasks of this group is sorting the general rubbish collected on the Sunday Litter Pick. So on Monday morning John started with this.

Con, Dylan & Adrian worked on the leaves gathering them from The Westgate Foundation to Muskerry Junction. In total 7 tonne bags were collected for composting.

7 black bags of leaves were removed from Leo Murphy Terrace and 14 black bags from Classes Lake.

Cutting back the flowerbed beside An Caisleán was done by John and 3 tonne bags of cuttings were removed.

All the summer planters are now prepared and stored for 2020.

Our compost was put to good use on Wednesday when 6 half bags of compost were dropped off to the flower beds on Station Road. 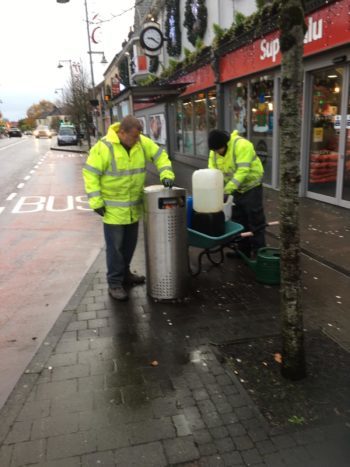 All the bins are being washed and cleaned along Main Street as part of our Winter Cleaning. It’s a matter of rolling up the sleeves and using elbow grease.

Thursday 12th December is the next stage in the preparation for the TG4 Documentary. Volunteers and pupils will gather at Gaelscoil Uí Riordan at 9 am and filming will commence with them doing a Litter Pick (weather permitting). Then on Monday 13thJanuary the group will travel to Dublin for filming. There is great excitement, the Volunteers are even speaking ‘as gaeilge’ among themselves.

The Annual Volunteers Christmas Dinner is scheduled for Saturday 7th December at The Oriel House Hotel. The night is paid for by the Volunteers themselves and spot prizes are also arranged. Although it is often the early hours of the morning before we finish up, the Volunteers will still be out for the Litter Pick a few hours later.

It is disappointing to find that despite all the work being done and the times we have asked, people still insist on putting Domestic Waste into the bins on the street. This has resulted in the removal of one bin. Bins are constantly monitored to make sure they are being used for the purpose of litter and not for business or domestic waste. When a bin is removed it puts a strain on the remaining bins and can result in more litter being discarded on the streets.

This week on our website we have been adding to our ‘Snippets’ blog with some interesting news.

Some more pictures have been added to the ‘Ballincollig Past’ page.

More ‘Fun Facts’ have been added. It is amazing what there is to be learnt from these facts. Things we probably never even thought about. But with the gorgeous illustrations and the simple facts, the information is easy to retain.

For these and much more, visit our website on www.ballincolligtidytowns.ie

As usual we are looking for new Volunteers. Please join us on Sunday morning at 11am if you can spare an hour. We meet at Quish’s SuperValu car park and Litter Pick for an hour. Afterwards we gather in The Oriel House Hotel for coffee/teas and biscuits.