A WEEK ON THE GO

Cork City Council would like to remind all individuals, businesses, political groups, estate agents, sporting clubs/associations and schools of the provisions of Section 19 of the Litter Pollution Act 1997 which states that a person who is not the owner, occupier or person in charge of any structure or other land, door, gate, window, tree, pole or post that is in or is visible from a public place, shall not exhibit or cause to be exhibited thereon any article or advertisement.

Cork City Council has a Postering Protocol in respect of property it owns and this protocol is available at www.corkcity.ie.

‍With effect from 1st February 2020 Cork City Council Litter Warden Service will be focusing resources on enforcing the provision of the Litter Pollution Act 1997 across the entire city (including the extended boundary areas of Glanmire, Douglas, Blarney and Ballincollig) in relation to illegal signage.

In order to avoid litter fines of €150 for each illegal sign, poster or article of advertisement Cork City Council advises each sector of society mentioned above to remove any and all illegal posters or advertising signs that they may have erected.

Despite the icy conditions, the CE/TUS workers continued their weekly work. The following were among their projects. Work on the GAA road was finished.

The weeds from under the seats on Main Street were cleared.

The alley beside Statoil had a lot of broken glass which the workers cleared up.

If we can educate our community in the value of planting more trees, it will make a huge difference. Some interesting information on the importance of planting trees –

This week we started revamping the raised area in the Allotment. The old bark mulch is being removed and recycled. We will then be remaking the flower bed borders with recycled material and, in association with the Local Parks Department, we will be putting down fresh bark mulch.

We are also due to start work with Ballincollig Scouts making a new Bug Hotel as part of their Chief Scouts Award.

Last Sunday a new recruit joined 30 Volunteers and 4 Transition Year students for the weekly Litter Pick. Although the day was freezing cold everyone got to work and the usual areas were covered.

In total 7 bags were collected which, when segregated, gave 1 bag of glass, 1 bag of plastic, 1 bag of cans and 4 bags of waste.

Our Volunteer, Kitty collected 2 bags of waste, 1 of cans and 1 of glass during Litter Picks she carried out during the previous week.

5 bags of green waste (not suitable for recycling) were collected from Beech Park. 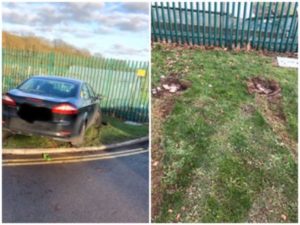 Last weekend was very disappointing for Ballincollig Tidy Towns. The crisp weather brought many visitors to the Regional Park. Unfortunately in their eagerness to get out in the fresh air, several people parked on grass where there is absolutely NO parking. In so doing they destroyed areas which we will now have to try to put right.

One car in particular parked completely up on the grass. Later, when they tried to back their car out the tyres only dug deeper into the wet soil and stones had to be put into the tracks in order to help them get out. Not only did they destroy the grass but they just drove off leaving the stones for others to remove. This shows a complete lack of respect not only for our beautiful Regional Park but also for the people who put so much time and effort into making Ballincollig a beautiful place.

There were many other cars driven by equally selfish people who did a lot of damage to other grass areas. They even ignored signs advising of planted bulbs and parked on top of them. How can people think that this is acceptable behaviour.

If they had looked around, they would have seen there was plenty parking in the nearby church and the car park adjoining Lidl. Please be more mindful in future.

Don’t forget to visit our website on www.ballincolligtidytowns.ie for all our news. This week we have added some very interesting information to our Biodiversity Page.