LETTER FROM THE CHAIRMAN OF BALLINCOLLIG TIDY TOWNS

As we come to the end of 2019 we look back on another very successful year for Ballincollig Tidy Towns and for our community as a whole.

Achieving our 8th Gold Medal was an honour for us all but more importantly to be in the top 2 or 3 nationally out of 932 says a lot about Ballincollig. We hope that 2020 will be an even better year for us all and hopefully we can improve even further.

As always, our achievements did not come about easily. They were, without doubt, a community effort. It is wonderful how so many people pull together in so many ways to make the town such a success.

Thanking everyone who supported us during the year would take forever. I would however, like to thank our Volunteers for all they do.

Also a very big thank you  to the City Council workers and the staff on the ground who do an incredible job. I also want to thank our Sponsors without whom our work would not be possible. Thank you to our Schools, our Residents Associations and to all those who give their time to make sure that Ballincollig goes from strength to strength.

We hope that we can count on everyone’s support in 2020.

Wishing you all a very Happy and Holy Christmas. 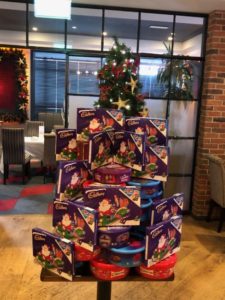 Christmas came early for our Volunteers and Transition Year (Gaisce) students on Sunday last when we gathered for coffee and chat after the Litter Pick. Each received an envelope with a number that corresponded to a gift from the ‘Chocolate Jenga’. There was so much fun searching for the correct numbers. Everyone was a winner!!

There are several Heritage locations throughout the town. Ballincollig Tidy Towns in Association with Cork County Council have put up bilingual information signs at each of these locations. The last of these Heritage Signs arrived this week and will be erected in the New Year along with the Header Sign for the new Oriel Walking Route. 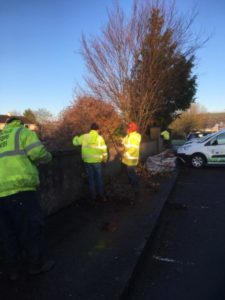 During the week this group carried out a big clean up on the Station Road near the old Nursing Home Madonna House. They did a fantastic job cutting back the hedges that were overhanging the footpath. This footpath is in constant use and, as a result of the work done, it is much safer now for pedestrians.

There were two bags of leaves collected from Leo Murphy Tce.

Next Sunday is the final ‘official’ Litter Pick for the year. 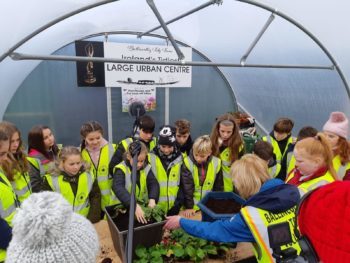 They learnt so much from each other always with one goal in mind “Ag obair le cheile, dá chéile” – “Working together, for one another”.

“Working together, for one another.”

We have been enjoying working with the pupils of sixth class in Gaelscoil Uí Ríordáin and the TG4 team over the past couple of months. We will be travelling to Dublin shortly after Christmas to film the last part of the “Cleas Act” television programme which we have been working on together. The programme will be broadcast early in the New Year. Don’t miss it!

Be sure to visit our website for news of what is happening in Ballincollig Tidy Towns and also around Ballincollig. This time of year is quieter than usual but there is still plenty to catch up on.