BEES – ARTICLE FROM THE GUARDIAN

It was once suggested that George Orwell’s notion of a hero was a working-class mother of 10 children. Partly on the basis of productivity, I’d suggest the queen buff-tailed bumblebee that visited our purple crocuses yesterday.

Over the summer this single insect might have more than 1,000 children (spare a thought, perhaps, for the ultimate social-insect matriarch: the Dorylus ant queen who can give birth to 300m offspring and have 5m around her at any one time).

Yet it’s not fertility alone that inspires my admiration. As I look out this morning, the garden is blurred with incessant rain and the temperature has dropped from 18C to 6C. Hopefully the bee is hunkered down in a nest, but to succeed she must lay about a dozen eggs and, when they hatch after four days, provide her emerging daughters – the so-called “workers” – with pollen and nectar. As well as constantly restocking these foodstuffs, the queen must also lay her abdomen over them to generate heat, keeping the brood at roughly 30C for them to develop properly.

Bear in mind that possibly eight out of 10 queens don’t even come through the rigours of hibernation, and that only one in 100 may be successful at founding a colony, and you begin to understand the allocation of heroic status.

There are, however, further factors in my choice. All around her thorax the queen bore a belt of granular pink, but these unpleasant-looking pimples were not her own anatomy but an infestation of phoretic mites, probably Parasitellus. Having overwintered with our heroine, these mites will then infest her brood and live off its rich pickings. 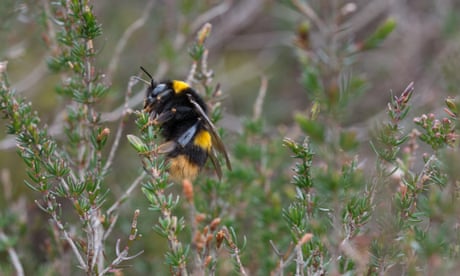 Country diary: bands of gold in my garden

Perhaps most admirable of the queen’s qualities is that she can fly at all. The energetics of bumblebees are nothing short of astonishing. In his 1996 book The Thermal Warriors: Strategies of Insect Survival, the wonderful American biologist and ultramarathon runner Bernd Heinrich compared their metabolism to a human jogger’s, who uses the calorific contents of a Mars bar in an hour. This queen, were she of human size, would burn 120 bars in every 60 minutes of flying time.