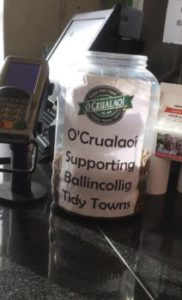 THE KINDNESS OF OTHERS

While visiting O’Crualaoi Butchers during the week, it was touching to see the extent they and their customers had gone to in support of Ballincollig Tidy Towns. There was a jar dedicated to Ballincollig Tidy Towns on their counter and it was filling up at a steady pace. Being a voluntary organization dependent on donations and sponsorship, this kind gesture was much appreciated.

DATE FOR THE DIARY

We are excited to announce a Public Meeting on Pollination to be held on Tuesday 3rd March at 8pm at the Oriel House Hotel.

Griffins Garden Centre will be giving a presentation on Pollination and will cover Biodiversity and Sustainability. Information will also be given on the importance of planting Pollinating Plants. We can all make a difference if we are willing to take steps to do so.

On the night Ballincollig Tidy Towns will launch the ‘new look’ Quishs SuperValu 2020 Estates Competition format. We are very excited as this year Biodiversity and Pollinator Corridors will be included in the marking system.

We would appreciate your support.

AND THEN THERE WAS LIGHT

Ballincollig Tidy Towns would like to thank the Local Area City Council Office who arranged to have the street light on the path from Westgate to Community Drive repaired and Airtricity who fitted the LED bulb so promptly. This has made a huge difference to the recently cleaned pathway. It makes it safer for people to use.

Although dog owners are proud when they teach their dogs new tricks, one trick they are never going to teach them no matter how much they might want to, is to pick up after themselves when they foul an area. Therefore, it is and ALWAYS will be the owners’ responsibility.

Despite the fact that there are numerous Dog Fouling Bins throughout Ballincollig and the Regional Park, many owners fail to pick up after their dogs. Others go so far as to pick it up in a bag and instead of putting it in the nearest bin they throw it in the bushes.

Please remember there is a fine of €150 for each dog fouling offence. And this the owners have to pay as dogs, although clever, have no pockets to carry this amount of money.

Ballincollig Tidy Towns is looking for new Volunteers to join them in the coming weeks and months. We have many exciting projects in the pipeline and the more help we have the more work we will get through. Volunteers for our weekly Litter Pick are also needed. If you have an hour or more to spare, please contact PAT CLARKE on 087 6348807.

Be sure to visit our Website on www.ballincolligtidytowns.ie  Our Biodiversity page has been updated with some new and interesting information.

Last Sunday’s weekly Litter Pick had to be cancelled due to storm Ciara. However, there were some brave souls who took to the streets and did a collection despite the weather. They held onto what they had collected and this will be added to next Sunday’s Litter Pick collection.

There has been some major work done in the Allotment over the last number of months getting it to a very high standard. Work replacing the timbers around the planters in the raised area in the Allotment began this week.

Clearing under the Beech Hedge on Old Fort Road continued. The ground is being prepared for planting wildflower seeds in the coming weeks.

Much of the week’s work was hampered because of storm Ciara which has thankfully moved away.