Last week we appealed to residents and businesses to clean the front of their premises.  Many thanks to those who have already responded and those who had done so even before our appeal. It was noticeable that several residents had taken the time to clean outside their homes and the results were excellent. However, as we have so many projects and so much work to get through, we are making an added  appeal for more volunteers. Come join us on Tuesday and/or Thursday Nights from 7 pm for our Work Nights. Or come out for our weekly Litter Pick on Sunday at 11 am for an hour.

Sunday last, 16th June, we had twenty seven Volunteers for the weekly Litter Pick.  It was a lovely fine morning and the volunteers covered most of the usual areas resulting in nine bags of litter and three for recycling.  In a pick outside the adjudication boundary a kilometre of roadway yielded a bag of litter plus a half bag of recyclables for two Volunteers.

During the previous week Volunteers were active litter picking each day collecting two bags of waste and two of recyclable materials.

Another busy week was put in by the group with plenty grass cutting, work at the allotment site and a big clean up on Baker’s Road. They did a great job on a wooden railing section near Poulavone. They also assisted a ten strong group from VMWare with weeding from Poulavone Roundabout towards Carrigrohane.

Once again we were assisted by a group of ten from VMWare on Tuesday 11th. They tackled a job weeding around the hydrangeas from the old Post Office at Carrigrohane back to the Roundabout and as mentioned above were assisted by the CE/TUS Work Group.

Thirty plus Volunteers turned out for the Tuesday and Thursday Work Nights. We got through so much work. The railing baskets at Muskerry, Innishmore and West End junctions were installed completing the street summer planting scheme for 2019.  Kerbs at the West End were cleaned by one group while other teams cleared kerbs in the Town Centre area. Kerbs and wall bases were cleared on Station Road making a big difference there. Litter picks were carried out on both evenings. 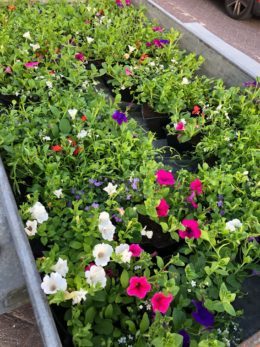 With all the planters in place, watering has started with two teams active during the last week.  Four Volunteers spent eight hours filling the reservoirs in the baskets.Water used came from the stored rainwater in the allotment.