John & Adrian spent Monday morning at the allotment sorting all the leaves and piling them into the Compost Bays.

They also sorted through the litter and recycling collected over the previous week including the Sunday morning litter pick.

It is heartening to notice that the amount of litter we collect each week continues to diminish. However, the amounts of plastics, cans and glass we recycle continue to grow. People are making definite efforts to recycle.

A tidy up around the entrance gate to the allotment was also carried out.

A much-needed new path was put in at the allotment. The result gives it a very refreshing look.

Adrian and John kept the busy week going and started a major overhaul on the watering unit. They began with a deep clean of the tanks at the allotment. Afterwards, they looked like new (the tanks that is, not Adrian and John!!)

With this job completed, they turned their attention to the watering trailer. This trailer has been on the go non-stop since June and although we overhauled it last year it was in need of a little more than that this time round.

As additional planters have been proposed for next year, we have taken the decision to invest in a second watering unit. Although a large investment, it is a necessary one and will have paid for itself in no time.

Adrian also emptied the cig/gum bins throughout the town centre.

pictures showing the path being laid at the allotment 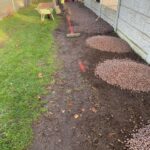 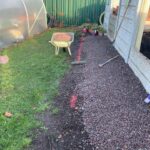 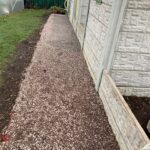 AND STILL THEY FALL

6 bags of leaves were collected from Leesdale Court.

22 bags were collected from Carrigdene.

4 bags were collected from Rosewood.

1 one-ton bag were collected from Westcliffe.

4 black bags were collected from Innishmore. 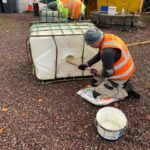 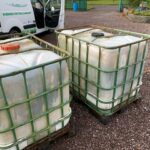 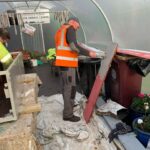 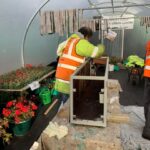 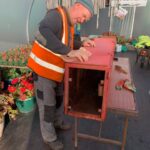 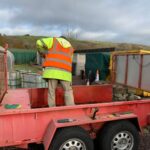 THERE HAS TO BE CHANGE

How we live and the choices we make on a daily basis have a huge impact on the health and wellbeing of ourselves and our planet. With so much being done to create a more sustainable and healthier planet we need to educate ourselves and implement changes that will have a positive impact for generations to come.

Let’s take a look at just two items in everyday use and their impact on our planet.

Did you know that 91% of plastic waste is in fact actually not recycled? We need to take action and implement new habits that will help reduce our use of plastic. If plastic pollution continues at the current rate, and isn’t curbed by 2050, pound for pound it will outweigh fish in our oceans. We are all guilty of overusing ‘single-use’ plastics and need to educate ourselves about the ill effects of them on our planet.

Single-use plastics or disposable plastics are plastic items typically used once, then thrown away or recycled. Single-use plastics consist of plastic bags, soda and water bottles, plastic straws, most restaurant food containers and other packaging. The energy it takes to produce single-use plastics comes mostly from fossil fuels, which are our largest source of heat-trapping greenhouse gas emissions. By reducing our dependence on single-use plastics, we can greatly reduce the impact these products have on our environment.

Facts we should know –

Pollution from single-use plastics accounts for over 50% of plastics found in landfills.

40% of all of the plastic we produce is for food and beverage packaging – typically used once and then discarded.

Nearly 2 million single-use plastic bags are distributed worldwide every minute; out of those less than 1% are recycled.

Millions of plastic straws were being used every day around the world. They have for the most part been replaced by biodegradable straws.

Billions of water bottles are purchased each year.

About 8% of the world’s oil production is used to make plastic products, and to power their manufacturing. It is projected that this figure will rise to 20% by 2050.

Every year billions of pounds of plastic waste flow into our oceans from coastal regions.

Discarded cigarette butts are the most collected item in worldwide beach cleanups annually. A huge percentage of people surveyed didn’t think cigarette butts were litter. However, they are in fact a form of non-biodegradable litter that pollute streets, rivers, and oceans throughout the world.

Cigarettes do not break down naturally. They can take up to 8 years to break down, depending on conditions.

More than one-third of all litter collected is made up of cigarette butts.

It has never been more important  for us to step back and think long term and make choices for the future. Next week we will look at some more items.

Despite the wet weather last Sunday morning, 20 Volunteers and 4 Transition Year students gathered for the weekly litter pick. They managed to cover a large area in the hour.

The Transition Year students spent the time working on the leaves and at the end of the hour they had gathered and filled 7 one-ton bags.

Two of the Volunteers did an amazing job clearing the leaves from the raised flower bed in front of Westcliffe Estate. They also cleared the footpath in this area. 3 one-ton bags of leaves were collected. This job will be returned to and completed when all the leaves have fallen.

As is usual, several Volunteers collected litter and items for recycling during the week. 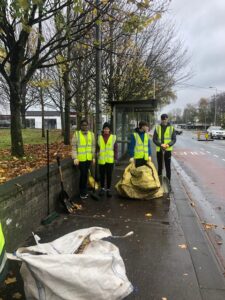 THE THOUGHTFULNESS OF OTHERS

This week Joan and Denise from TUDOR ROSE delivered some beautiful Christmas Hyacinths to us as a way of saying ‘Thank You’ to our Volunteers for all their hard work.

This was such a thoughtful kind gesture.

Thank you. They are gorgeous and greatly appreciated. 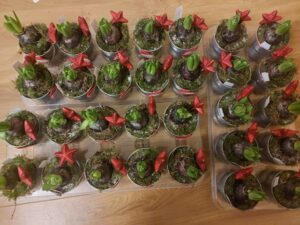