Looking for all you photographers out there. Perhaps you are a dab hand at photography or maybe you like to take the odd picture on your smart-phone.

The 2021 TidyTowns Photography Competition is opening up and they are looking for you to submit photographs, which capture the ethos of TidyTowns or perhaps a project that your group have brought to fruition.

This year again there will be a special category for junior entrants up to 18 years of age, this category will attract a 1st prize of €150 and a 2nd prize of €75.

The main competition will have a

Best Of Luck Everyone

OCTOBER A TIME TO…

All our gardens require some effort in October in preparation for winter and the coming spring.

Grass will usually have one final cut during this month. Preferably done when the heavy autumn dew has dried so the blades of the mower won’t tear at the grass.

It’s better to take a rake to fallen leaves before they become a pile of damp mulch making it almost impossible to remove them from the grass.

Grass clippings and dead leaves are perfect for the veggie beds.

Hedges should be trimmed ready for next year’s new growth.

Potted Pants not suitable for the harsh weather should be brought into a dry shed for the winter. It is also a good idea to store wooden furniture inside.

It’s time to plant your spring bulbs and have some colour to look forward to when the early spring rays of sunlight begin to appear. Daffodils, tulips and crocuses in yellows, pinks and purple all look fantastic together.

October is the time to dig empty vegetable beds and leave them for the frost to do its work. A good hard frost breaks up the surface of the soil and helps kill weed spores.

Cauliflower plants and young spring cabbage can be planted in greenhouses or under a cold frame now, ready for transferring outside in the New Year.

Peas and beans grown outdoors on canes this year, can have any foliage cut off, if not already done. This can then be composted. The roots are a great source of nitrogen and can be dug back into the soil to fertilize it naturally.

Garden ponds will also need attention this month. It’s a good idea to place pond netting over the pond surface to prevent leaves falling in. Leaves that have fallen into the pond must be removed to avoid damaging fish and pondlife as they rot.

As winter sets in it’s important to keep an eye that water doesn’t freeze over and can ‘breathe’. A completely frozen surface will cause a lack of oxygen trapping any toxic gasses in the water, which in turn will kill fish and pond wildlife.

Plants in the water or around the edge of the pond can have dead foliage trimmed away now. 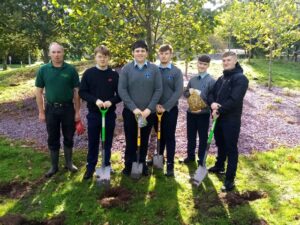 This week he worked with them planting bulbs which will bloom in the Spring next year.

On Friday the Waterboys watered all the Planters including those at Eastgate, the Towers and the Parklet in just under two hours. They only used 700 litres of water as there has been plenty of rain over the past week.

Watering on Monday night took them a lot longer than expected because there were some mechanical issues. 900 litres of harvested water were used and all the Planters were watered. Some of the hose fittings were damaged and causing water leaks. Because of this the two Pats were out for two and a-half hours.

Thursday’s watering took two and a half hours and 800 litres of water were used.  All Planters including the Planters at Eastgate, the Towers and Parklet were watered.

Several Volunteers were out doing daily Litter Picks during the week.

The total number of bags of Litter collected over the week was sixteen.  Two bags of Plastic, two bags of Glass and two bags of Cans were also collected.

Phase 2 of the project on the Link Road began this week. Adrian edged the footpaths.

This work continued on Tuesday and Wednesday with John and Adrian both edging the footpaths from the Commercial Park to The Fire Station. The results were fabulous.

Forty bags of edging were removed and taken to the Allotment for recycling. 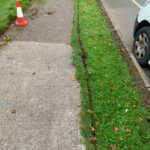 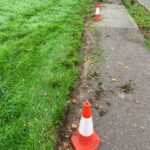 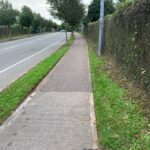 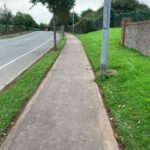 While John was working on the Compost Bays in the Allotment Adrian painted the sleepers and did a general tidy up around the area.

Tesco donated a large consignment of unsold plants which will be assessed in the coming days and those that can be used will be planted. The remainder will be placed in the Polytunnel to be brought on hopefully for the spring. 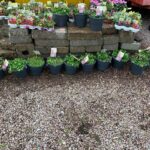 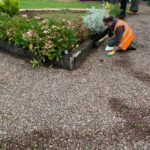 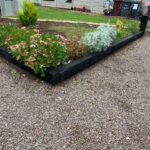 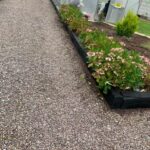 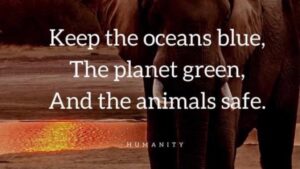