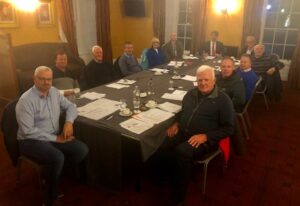 It was good to see all our Committee Members in person. A minute’s silence was held as a mark of respect for all who had passed away from Covid.

Reviewing projects and planning for 2022 were part of the packed agenda.

Our Volunteers were praised for the incredible work they carried out keeping the community looking its best during the pandemic.

At the start of the week Adrian cut back the overhanging and protruding briars on the Link Road. By Thursday he had completed the project. This was phase one. The next phase is to edge the Footpaths.

A total of seven one-ton bags of Briars and Bindweed were collected. 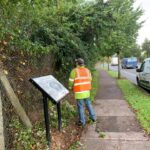 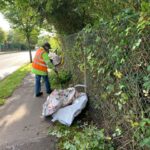 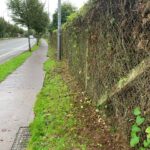 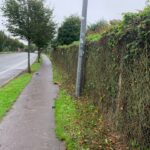 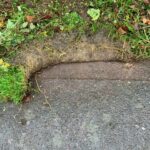 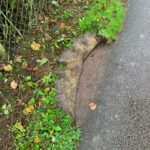 He also emptied the Cig/Gum bins in the town centre.

John sorted through the bags of Litter from Sunday’s Litter Pick. When these were segregated out there was a further bag each of Cans and Plastic. There was also some Electrical Waste.

He cleaned out Compost Bay 1 in preparation for the 2021 leaves. Compost Bay 3 is completely full and will be used when we tackle the Hydrangeas, a project that will be done over two Saturdays in November. 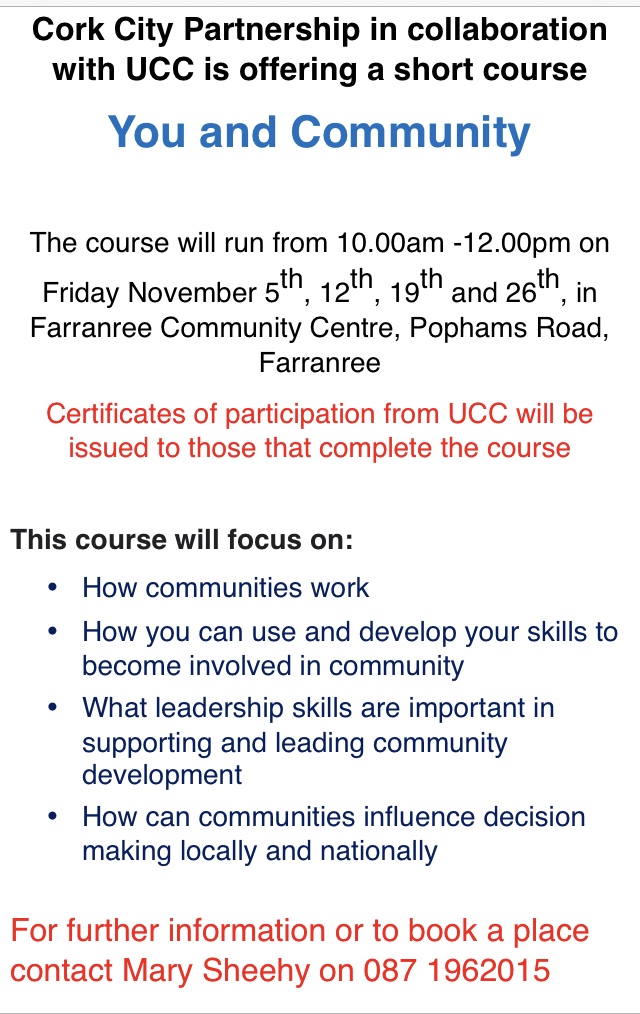 On Sunday morning there were twenty Volunteers out for the weekly Litter Pick. They were joined by three Transition Year students – Charlie, Mark and Sean from Colaiste Choilm who have elected to volunteer with Ballincollig Tidy Towns as part of their Gaisce Award. We hope they enjoy their time with us.

We are expecting some more Transition Year students to join us in the coming weeks.

The extra numbers allowed more areas to be covered in the Town and surrounds.

The usual Litter Picks were carried out by several Volunteers during the week.

The total amounts collected were nineteen bags of Litter, three bags of Cans, one bag of Glass and one bag of Plastic.

ONE MORE FOR THE ROAD 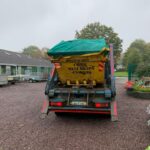 This week another load of Litter was collected from the Allotment.

The Litter was as a result of the work our Volunteers put in over the past few months.

There are two sets of Tanks in the allotment for collecting the Rain Water from the roof of Scoil Barra. 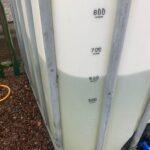 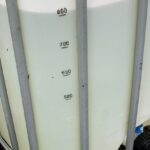 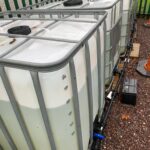 Never has it been more important than now for us to work to save our climate, to try to right all the wrongs that have been done to it over the past number of decades.

Sustainable Development Goals (SDGs), also known as the Global Goals, were adopted by all United Nations Member States in 2015 as a universal call to action to end poverty, protect the planet and ensure that all people enjoy peace and prosperity by 2030.

Achieving the SDGs requires the partnership of governments, private sectors, civil society and citizens alike to make sure everyone leaves a better planet for future generations.

EARTHSHOT: HOW TO SAVE OUR PLANET

Written by Colin Butfield and Jonnie Hughes with an introduction written by HRH Prince William, this book is a powerful manifesto for tackling the environmental crisis with collective action highlighting the role of innovation, problem-solving and optimism and boasting contributions from Sir David Attenborough, Christiana Figueres and many more. 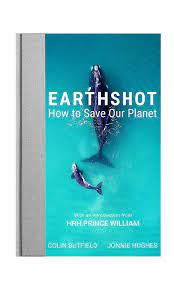 With ten years to change the fate of our planet’s future – this is how.

As Prince William, founder of The Earthshot Prize, said, ‘The Earth is at a tipping point and we face a stark choice: either we continue as we are and irreparably damage our planet, or we remember our unique power as human beings and our continual ability to lead, innovate, and problem-solve. People can achieve great things. The next ten years present us with one of our greatest tests – a decade of action to repair the Earth.’

The Earthshot concept is simple: Urgency + Optimism = Action. We have ten years to turn the tide on the environmental crisis, but we need the world’s best solutions and one shared goal – to save our planet.

It’s not too late, but we need collective action now.

The Earthshots are unifying, ambitious goals for our planet which, if achieved by 2030, will improve life for all of us, for the rest of life on Earth, and for generations to come. They are to:

Earthshot: How to Save Our Planet is the first definitive book about how these goals can tackle the environmental crisis. It is a critical contribution to the most important story of the decade. 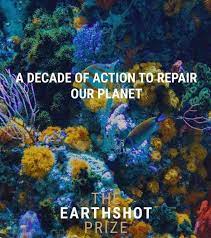 Over the last ten years, the evidence that we face urgent challenges to protect the environment has become indisputable, and it’s clear that the time to act is now.

In response, The Royal Foundation and Prince William have launched The Earthshot Prize, the most prestigious global prize for the environment in history.

The Prize is about much more than awarding achievement – it is a decade of action to convene the environmental world with funders, businesses and individuals to maximise impact and take solutions to scale, to celebrate the people and places driving change; and to inspire people all over the world to work together to repair the planet.

It will incentivise change and help to repair our planet over the next ten years – a critical decade for the Earth.

It will find the most inspiring solutions to the world’s greatest challenges. These new solutions will work on every level, have a positive effect on environmental change and improve living standards globally, particularly for communities most at risk from climate change.

Prizes will be awarded to a wide range of individuals, teams or collaborations – scientists, activists, economists, community projects, leaders, governments, banks, businesses, cities, and countries – anyone whose workable solutions make a substantial contribution to achieving the Earthshots.

The Duke of Cambridge has called for nations to “protect and restore nature” in a BBC series highlighting the aims of his Earthshot Prize.

He launched his environmental prize to face the planet’s problems head on and overcome fears saying in the footage: “This is a moment for hope, not fear”.

He hosts the five-part television show about the environment featuring pioneers who have been recognised for finding innovative solutions to climate issues.

In June 2021 Sir David Attenborough delivered a message to the leaders gathered in Cornwall as they considered how to protect the environment.

G7 leaders face some of the most important decisions in human history as they tackle the climate change crisis, Sir David Attenborough said.

The environmentalist addressed the leaders gathered in Cornwall as they set out plans to reverse biodiversity loss and to fund infrastructure development around the world.

Sir David delivered a message to the G7, plus guests Australia, India, South Korea and South Africa, at a session on climate and nature.

In advance of the session, he said: “The natural world today is greatly diminished. That is undeniable.

“Our climate is warming fast. That is beyond doubt. Our societies and nations are unequal and that is sadly plain to see.

“But the question science forces us to address specifically in 2021 is whether as a result of these intertwined facts we are on the verge of destabilising the entire planet?

“If that is so, then the decisions we make this decade – in particular the decisions made by the most economically advanced nations – are the most important in human history.”

Mixed in with the environmental intentions of the G7 is an attempt to reassert the values of the leading democracies around the world.

The “build back better for the world” plan will bring together G7 countries to develop an offer for high quality financing for vital infrastructure, from railways in Africa to wind farms in Asia.

The move is part of an attempt to counter Beijing’s “belt and road” initiative which has spread Chinese influence around the world.

The new approach is intended to give developing countries access to more, better and faster finance, while accelerating the global shift to renewable energy and sustainable technology..

The Prime Minister said: “Protecting our planet is the most important thing we as leaders can do for our people.

“As democratic nations we have a responsibility to help developing countries reap the benefits of clean growth through a fair and transparent system.

“The G7 has an unprecedented opportunity to drive a global Green Industrial Revolution, with the potential to transform the way we live.”

The countries set out the action they will take to slash carbon emissions, including measures like ending all unabated coal use as soon as possible, halting almost all direct government support for the fossil fuel energy sector overseas and phasing out petrol and diesel cars.

The G7 also endorsed a nature compact, aimed at halting and reversing biodiversity loss by 2030 – including supporting the global target to conserve or protect at least 30% of land and oceans by the end of the decade.

The fund will run for at least five years.