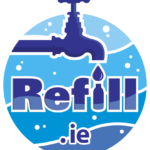 Ballincollig is a perfect place for people walking, running or cycling. There are numerous long and short routes that are safe for people to use. Areas are well lit making night time use also safe. The one item for sure each of them will have with them is water.

Despite Ireland having some of the highest quality tap drinking water in the world it is the European country with the least number of public drinking water taps on the streets and in parks. This makes us wholly dependent on the frequent buying of single use plastic bottles of water. These are the number one type of waste found by tidy towns Volunteers on litter picks throughout Ireland. The bottles and their plastic tops frequently end up littering our streets, waterways, beaches, coastlines and seas.

If companies fail to create biodegradable drinking water bottles for people in Ireland, we will need to do something about it.Some places have now signed up to ‘Refill Ireland’. This is an Environmental Project aiming to make tap water in Irish towns and cities refill friendly for people on the go. It locates places where FREE filling of reusable water bottles is made readily available. Increasing the number of stations will make refilling bottles an everyday habit and ultimately protect our environment from more bottle waste.

Refill Ireland’s aim is to substantially reduce the amount of and dependence on consuming our drinking water in single use plastic bottles.

The Allotment is Ballincollig Tidy Towns’ base and over time the original flowerbeds that we created there have deteriorated. Over the past two weeks the CE/TUS Workers have been doing great work upgrading them. They have also been spreading the bark mulch very kindly supplied to us by Ballincollig Parks Department.

It doesn’t seem that long ago since leaves were falling from the various trees throughout Ballincollig. Over 1,000 bags were collected over the past number of months and placed in the Composting Bays at the Allotment. These have been regularly turned and are in the process of breaking down. When they have completely broken down, there will be an amount of excellent compost for us to use in upcoming projects.

Despite Storm Denis twenty-five Volunteers and three Transition Year Students were out for the weekly Litter Pick.  One such Volunteer was Ger McSweeney who braved the elements and worked his way through Main Street. The following were the totals collected – 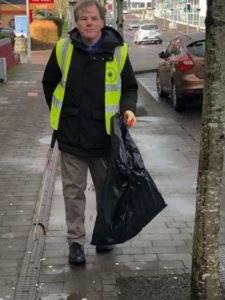 4 Bags of Green Waste were collected from Beech Park

There were also 2 Bags of Waste and 1 Bag of Glass collected from Litter Picks during the week.

Check out our website on www.ballincolligtidytowns.ie for all the up to date news on what is going on in Ballincollig Tidy Towns. We will be introducing more blogs on new subjects in the coming weeks.

We are always looking for new Volunteers to come join our happy group for the Sunday Litter Pick. It’s only for one hour and then there is a chance to relax and chat over a coffee/tea and a treat. Maybe you would like to be a Volunteer working on various projects throughout Ballincollig? We will be looking for ‘Wash Down’ Volunteers and ‘Work Night’ Volunteers in the coming weeks. If interested please contact PAT CLARKE on 087 6348807.