With a General Election called for Saturday 8th February, 2020 Ballincollig Tidy Towns is asking all Election Candidates to observe the TOTAL BAN on election posters in the following areas.

IT SHOULD BE NOTED THAT ALL THE AREA WITHIN AND INCLUDING THESE OUTLINED BOUNDARIES IS TO BE KEPT POSTER FREE.

In the interest of our environment we are taking the decision to extend the area covered by the poster ban. This is as a result of the vast number of tie wraps left on the ground in the areas outside the ‘poster ban area’ after previous elections.

Last Sunday there were 30 Volunteers and 3 Transition Year students out for the weekly Litter Pick. All the usual places were covered.

During the week some Volunteers carried out litter picks each day. In total 1 bag of recyclables was gathered.

A resident who is doing Litter Picks in the Old Quarter collected one bag of litter.

This week there were many works carried out by the CE/TUS Workers including in the main town centre Car Park.

Also, Inniscarra Road Footpath was cleaned. The road down to the Community
Hospital and the GAA Club was also cleaned and cut back.

The left hand side of the Carrigrohane Road (opp. the Hydrangeas) was cut back. This area
has proven very difficult to grow flowers in because of bad soil. By cutting it back, it has opened up the area. We hope to improve the soil by using our own leaf mulch. There is a two phase planting planned for this year and next year. This will form part of our Pollinator Corridor.

The Walking Route Posts and a Seat were put in this week on the longest of our
three Walking Routes. The Oriel House Walk will be finished this week and our thanks to Denis O’Leary for the huge amount of work he put into erecting these. 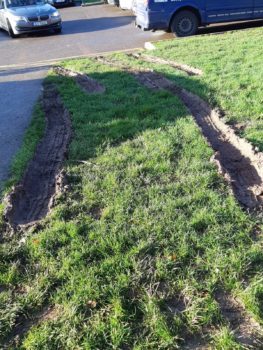 WHAT WERE THEY THINKING!!

REGIONAL PARK ‘PARKING’?? Come on motorists please show respect and do NOT park on the grass. Picture shows the damage caused by a motorist this week – what were they thinking!!

Filming went ahead this week in the RTE studios in Donnybrook for the TG4 programme Class Act. Three buses carrying pupils and teachers from Gaelscoil Ui Riordain and Ballincollig Tidy Towns Volunteers made their way to Dublin on Monday. This was the final part of pupils and Volunteers working together and culminated in ‘the choir’ singing a Louis Capaldi song. Several pupils were also interviewed during the day. We are all now looking forward to it being aired on TG4 in March.

Have you an hour or two to spare on a Sunday morning or during the week? Would you like to join us on our weekly Litter Pick or perhaps help in some other way? Spring is coming and soon our Tuesday and Thursday Work Nights will be restarting. We are always looking for more Volunteers for both. If you think you would like to give us some time, we meet on Sunday mornings at the car park at Quish’s SuperValu at 11am for the Litter Pick.