KEEPING YOU UP TO DATE 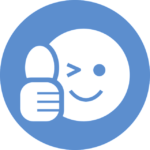 The second round results are in!! Ballincollig has scored really well this time round. We scored 992.9 out of a possible 1000. Three areas scored 100 with no butts or litter and the lowest score in an area was 98.5 out of 100. The comment given was ‘Super results for excellent work – very  busy town with wide footpaths. Great to see the plentiful bins being used.’

After two weeks, Ballincollig lies in fourth place in its category. What a wonderful position to be in when you consider we came last in our category last year. It goes to show what can be achieved when we work together as a community.

Last Sunday, the 2nd June, twenty six Volunteers including two Transition Year students gathered for the weekly litter pick. We had a lovely fine morning with ten bags collected. Three of those were segregated for recycling.

During the week previous, Volunteers were active litter picking each day collecting four bags in all, two of waste and two of recyclable materials.

Another busy week put down by this group with work in the allotment as well as grass cutting, kerb cleaning, clearing at Flynn’s Road and cutting the beech hedge at Old Fort Road having taken place.  The planting project that was started in Fr. Sexton Park was completed on the day Ballincollig became part of the city. Ballincollig Tidy Towns decided to call the feature stone in the planting scheme the ‘Transition Stone’.  The bedding areas on Station Road have been refreshed. The Bee Friendly plants used in the planting are now part of the Ballincollig Pollinator Corridor initiative. 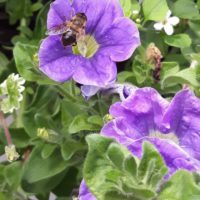 Our Tuesday and Thursday work nights numbers are up on the previous week with thirty Volunteers taking on tasks in the area of the Town Centre. Weeding, kerb cleaning, litter picking and washing street furniture were completed.  It is great to see some extra help and also some new volunteers turning out. We really appreciate the help so thank you to everyone especially new Volunteers Ciara, Henry and Ruth..

On Wednesday grass margins were cleared at the Leo Murphy-Link Road/Limeworth junction.  Once again we are truly indebted to VMWare volunteers. On this occasion they filled up to 40 bags with  sods and earth.

The exposed verge near Gael Colaiste Ui Riordan is seeded for wildflowers. Ballincollig is playing its part for biodiversity. The Pollinator Corridor is growing and extending throughout the town with very exciting results so far. 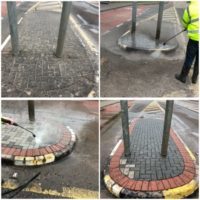 On Saturday, yet another early start for O’Donovan Agri Services as the ‘washing project’ continued to move to the west side of Ballincollig with walls and traffic islands steam cleaned.  One more early morning is probably all that is needed to complete all the traffic islands.

If you are interested in joining us any Sunday just come along to Quish’s SuperValu West End where we meet up at 11.00 am for our weekly litter pick. If you have a couple of hours to spare on a Tuesday and/or Thursday night, why not join us outside AIB on Main Street at 7 pm. We have many projects on the go and so all help would be gratefully accepted.