Twenty-two Volunteers gathered on Sunday morning for the weekly litter pick. There were no Transition Year students as they were on Easter holidays. We look forward to their return.

During the week several litter picks were carried out and the bags of litter collected were added to Sunday’s total.

Four of the 14 bags of litter collected were the result of the hard work of the Under 12 Ladies GAA team. We were delighted with their help and appreciate all their hard work. They showed huge community spirit.

The Residents of Maglin Estate carried out a clean-up of their kerbs and we collected 3 bags of debris that they had gathered.

Twenty bags of grass were collected at Carrigdene following grass having been cut back.

pics: the amazing Under 12’s Ballincollig LGFA who were litter picking prior to their training session 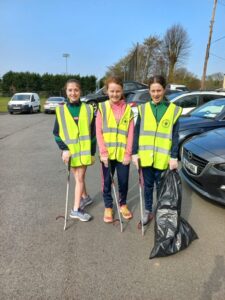 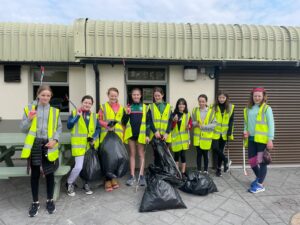 Next Saturday morning 7th May, at 04.15 people from all over the world will come together to walk as one, united in bringing hope to those impacted by suicide.

Making the event a success gives people the opportunity to continue to raise awareness and hope in the global fight against suicide and self-harm.

Since Darkness Into Light began, people’s ongoing support has enabled Pieta’s doors and it’s 24/7 Helpline remain open free of charge for those in crisis.

Those walking in Ballincollig will gather at BALLINCOLLIG COMMUNITY SCHOOL in Innishmore for what will be a very moving and memorable event.

Adrian finished work on the Killumney Road and a further 12 bags of edging were removed for recycling.

The week’s litter was sorted by John and yielded 2 bags of plastic, 2 bags of cans and 1 crate of glass.

Two new planters were fitted on the railings at West Village.

Signage was erected to highlight the area where the fruit trees were planted as part of the DC’s for Bees Project.

Our workers returned to the Old Fort Road to cut hedges and grass. Twenty bags of green waste were recycled.

John cut the grass on the Killumney Road. He also continued working on the compost adding in the grass from last Saturday]s grass cutting on the Poulavone Roundabout.

Cork Walking Month is back! It ‘walks’ from 1st May to 31st May. The main aim is to Get Cork Walking and Celebrate Walking in Our Communities.

The benefits of walking are huge in many areas of society from health to environmental to economic. We are encouraging individuals, groups, clubs, in fact everyone to get involved throughout the month and beyond.

There will be many opportunities to join walking and hillwalking groups in local areas and also many events and workshops will be run. Community walks that are open to the public will be highlighted as will introductory hillwalking sessions like the Rebel Ramble Series and much more.

Get Cork Walking together this May.  If you are a member of a walking group or club and would like to get involved, please contact Walking Promotion Officer Alison Chambers at achambers@corksports.ie

From this week dahlias and corms of gladiolus can be planted out where they are to flower. Containers and baskets of summer bedding flowers, such as petunias and verbenas, can be planted up now.

With temperatures on the increase, slugs and snails can very quickly cause severe damage to susceptible plants like hostas and ligularias.

Dahlias can also be attacked by slugs as they come through the soil and sometimes this is difficult to spot. To get to a good size, bedding plants should be grown on strongly. The plants should be spaced well to give them room to grow before planting out.

There is still time to sow hardy annual flowers for a spot of colour later on.

Clip vigorous hedges. Roses should be sprayed regularly against blackspot disease. Especially so in the damper parts of the country after wet weather. Continue to tie in the new shoots of climbing roses as they grow.

Prune early summer shrubs as they go out of flower, if necessary, such as broom and weigela. Broom can be pruned by cutting back the flowered shoots to within about 5cm immediately after flowering. Otherwise, shrubs should be thinned out rather than shortening back every branch. Thinning branches reduces size but does not change the shape of the shrub or interfere with flowering too much.

pics: another group of VMware Volunteers out clearing weeds from around the new trees planted in the orchard 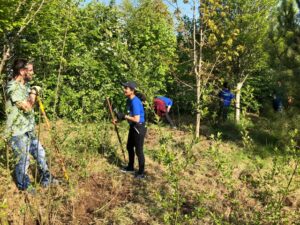 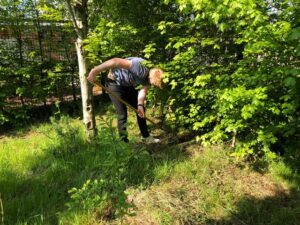 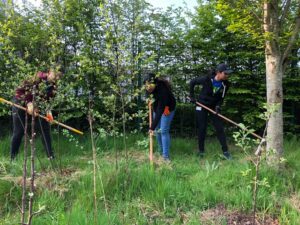 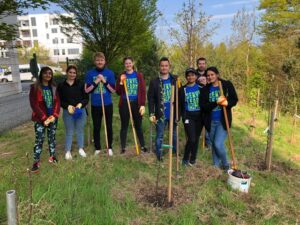 Two of the Residents of Fr. Sexton Park, Kitty O’Callaghan and Ann McNulty did some magnificent work cleaning the Transition Stone Bed and cutting the grass in Fr. Sexton Park.

some pics from the week 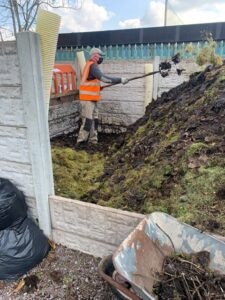 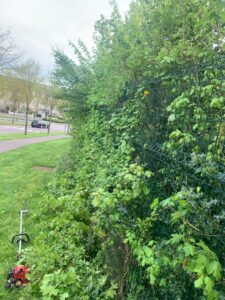 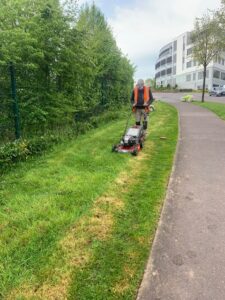 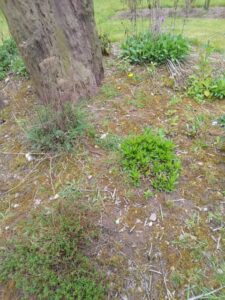 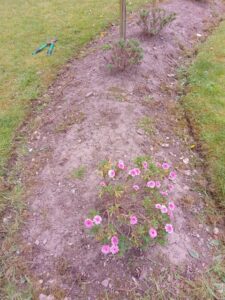 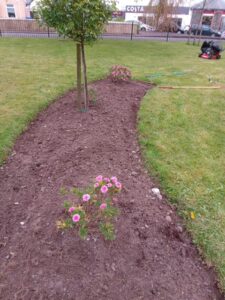 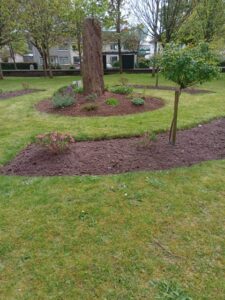