Sunday last, the 28th July, twenty eight Volunteers turned out for the weekly Sunday morning Litter Pick. Most of the usual areas were covered in the hour and, as has been the norm lately, litter was light.  In total we collected seven bags of litter and two of recycling. During the previous week Volunteers were active litter picking each day and they collected two bags of waste and two of recyclable materials.

The finishing touches were put to the Allotment on Monday and Tuesday with the spreading of bark mulch and shale. We are extremely grateful once again to 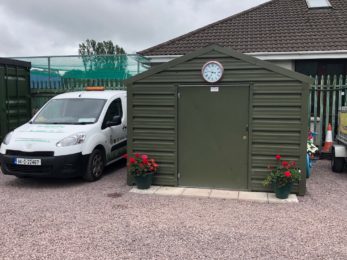 Finbarr O’Neill Sand and Gravel for the supply of the stone. The Allotment looks so much better now. Other work carried out by the group included  refuse bag collections, grass strimming and grass cutting in a number of areas.

For the Tuesday and Thursday Work Nights we had over thirty Volunteers turn out. They put in well over forty hours clearing kerbside weeds and generally tidying up overgrowth.  The Poulavone area again came in for attention with boundary areas cleared, grass margins edged and weeding done.

High temperatures meant more watering of plants was needed and five Volunteers saw to it that all were attended to over the course of the week.

Estate judging continued with four Volunteers on duty in the week past.  Hopefully it will be completed this week and then it’s on to the Second Round.

Biodiversity signs were installed at six locations to highlight the efforts being made to provide feeding areas for the bees.

A number of business premises were given a lift with painting having been completed.  This is excellent and good timing as the Second Round of the National Tidy Towns adjudication is currently underway.

Hoarding went up at the Circus Field site and ground clearance commenced.

On Saturday evening members of Ennis Tidy Towns came to visit and were met by a representation from Ballincollig Tidy Towns.

Apart from having afternoon tea at the Oriel House Hotel, they visited Barrack Square, the Allotment and the Regional Park. We all shared some ideas and they were very complimentary on how well Ballincollig looked. 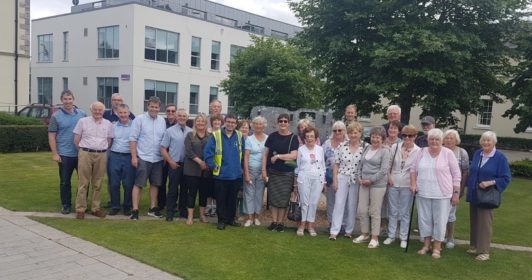 The new walkway from the GAA grounds to Manor Hill is due to be handed over to the Council this weekend. This is going to be a wonderful  addition to the amenity walks already in place..

If you are interested in joining us any Sunday for the weekly Litter Pick, please come along to Quish’s SuperValu West End where we meet up at 11 am. If anyone has a couple of hours to spare on a Tuesday and/or Thursday night, we would appreciate your help. We meet at AIB Main Street at 7 pm both nights.