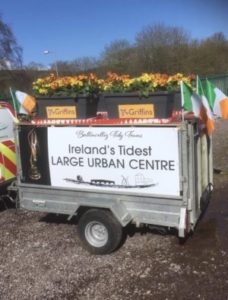 Sunday last the 17th March, Ballincollig celebrated it’s 10th St.Patrick’s Day Parade. The day was lovely and crisp. An enormous amount of work went into the preparation of the parade with fifty five groups participating. With participants from various local clubs, voluntary groups and businesses, everyone gathered ahead of the 3pm start. There were many colourful floats and banners and there was a great buzz in the town. Crowds began to line the streets ahead of time in the hope of getting the best view. Despite the threat of showers it managed to stay dry. People lined the streets from Castle Park to the Muskerry junction.

Great credit is due to Ballincollig Business Association for organising the parade. We had Volunteers out on the roads both the previous night and early that morning setting up signage and barriers. These same Volunteers removed the barriers and signage after the parade. Prize giving was held in The Oriel House Hotel afterwards.

There were prizes for Best Group won by Ghostbusters, Best Presentation won by RB Fitness, Best Float won by SOS Recovery and Best in Retail won by Finbarr O’Neill.  The overall Best in Parade winner was Trace of Cakes. Well done to all.

In order to ensure the route was litter free, we conducted a litter pick earlier than usual on the day. We also installed barrels for the extra litter expected from the large crowds attending the parade. Afterwards, a quick pick was conducted to return the streets to their usual clean appearance.

Ballincollig Tidy Towns also participated in the Parade and our theme this year was to promote planting for bees. In this we were supported by Griffins Garden Centre and Griffins also provided flowers for the viewing stage display.

We were delighted to be awarded 2nd prize in the Best group category. It was lovely to participate in this pleasant memorable day. About 30 hours work was put in and approximately 20 bags of waste were collected in total. 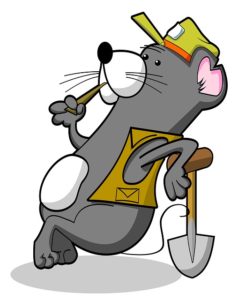 Despite the bad weather, the main works carried out during the week were the completing of projects in the allotment. Time was also put in to preparing the float for the parade.

Next up Is the National Spring Clean Initiative which will run over the month of April. We hope that Residents and Resident Associations will continue to conduct clean ups during April which in turn will give Ballincollig a boost for the summer competitions,

Our website is continuing it’s makeover. The aim is that Ballincollig Tidy Towns website will not only contain all that is happening in the town but much much more, We are hoping to have it become a ‘go to’ site where there will be something for everyone.

If you are interested in joining us any Sunday for the weekly litter pick make sure you come along to Quish’s SuperValu West End where we meet up at 11.00 am. 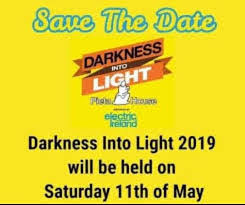 Darkness Into Light is fast approaching so please make sure you register early. Come and join us on Saturday 11th May, 2019 at 4.15am starting and finishing at Colaiste Choilm, Balllincollig.