Ballincollig Tidy Towns are delighted to support O’Crualaoi Butchers and Delicatessen  in their new initiative.

The following is a press release issued in connection with their forward thinking plan to do their bit to reduce the environmental footprint .

Ó Crualaoi Butchers and Delicatessen today launched its ‘ÓCruaware – Reducing Our Environmental Footprint’ initiative in Cork.  The significant initiative will encourage customers to bring their own reusable containers when shopping, and will be rolled out across the company’s Ballincollig-based butchers 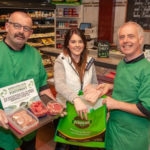 and delicatessen and its butcher shops in Fermoy and Wilton.  The main objective of the ‘ÓCruaware’ initiative is to reduce plastic packaging on customer purchases, thereby reducing their environmental footprint.

In Ireland, an average of 61kgs of plastic waste is produced per person annually, which is almost double the UK figure and the highest in Europe.

Speaking about the Ó Crualaoi ‘ÓCruaware’ initiative, Micheál Ó Crualaoi, Chairman of Ó Crualaoi Butchers and Delicatessen, said, “On average, each customer receives 20 grams of packaging in each transaction, which would equate to over 200kgs per week for our customers.  That is a significant amount of plastic waste, therefore, we are encouraging customers to embrace the initiative by using reusable containers. Metal containers are the best as they last longer and can be recycled at end of life. This year, our aim is to reduce our non-recyclable packaging by 10% – 15%.”

“I believe we should all make a positive contribution to a cleaner, greener environment.  Buying food unwrapped is the single biggest impact our customers can make, as well as bringing a ‘bag for life’ when they shop,” concluded Mr. O’Crualaoi.