Once again Ballincollig Tidy Towns is proud to be involved in the Christmas Festival.

This year’s tree is dedicated to our late friend and Volunteer Tony Whelan.

It is decorated with blue and white baubles representing Tony’s Waterford connection. There are also miniature Tidy Towns High Visibility Jackets kindly made for us by Collette Desmond.

Tony was held in such high regard by Ballincollig Tidy Towns and this tree symbolizes how much he meant to us all and its our way to show he is always in our thoughts.

This is the third Christmas Festival – and each one has been a little different!

On Thursday 8 December, there was a Musical Launch to open the Festival at the Carraig Centre Ballincollig.

Christmas Trees, decorated by local businesses, schools and groups, telling the Christmas Story (with a sheep hunt!) – can be explored and enjoyed on:

St Peter’s Church and St Peter’s Field, Carrigrohane, The West Wing of The Carraig Centre, Ballincollig and The Church of the Resurrection, Blarney.

Other events in the festival include:

Yet another bag of household rubbish and nappies were thrown from a car at the junction of Barry’s Road & Greenfields Road. This person has no shame and no regard whatsoever for the rest of the community.

The leaves are finally coming to an end. However, there are still plenty to be collected from several areas around Ballincollig.

There are still a large number of bags of leaves to be collected from Fr Sexton Park.

26 bags of leaves were removed from Carrigdene,

7 bags were removed from Beech Park,

We collected 1 full one-ton bag from across the road from Tesco.

There were 23 Volunteers and 4 Transition Year students out for the weekly litter pick. The TY students worked with us to remove the tiered Towers.

Several of our Volunteers carried out several litter picks during the week. When all that was collected was added to Sunday’s efforts it yielded 1 bag of Glass and 1 bag of Cans.

1 bag of Litter was collected from Old Quarter.

Four of our TY students helped two Volunteers remove the 4 large base sections of the tiered Towers from Main Street. They did some great work together emptying and bagging the compost.

Once removed, the area was scrubbed and washed down. The rain kindly assisted in this.

On Saturday morning 14 Volunteers were out bright and early cleaning around the traffic islands. They also collected leaves especially in the Cycle Lanes near Colaiste Choilm. The hour and a half made such a difference to the area.

Some more Volunteers started work taking down the Towers on Main Street.

Unfortunately, although costs have increased, the level of support is down on previous years.

pics from the week – 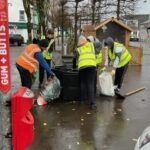 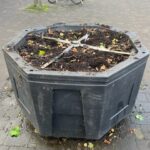 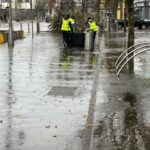 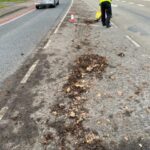 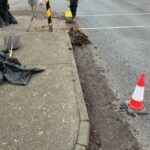 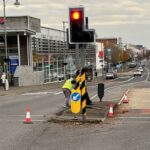 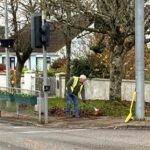 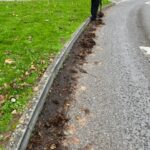 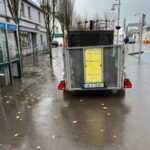 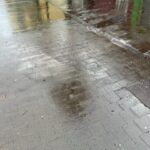