For the past number of years Ballincollig Tidy Towns has been campaigning to stop the use of herbicides throughout Ballincollig.

This initiative was in its initial stages when Coronavirus hit the world and everything was put on hold. BTT kept working on this concept throughout the pandemic until Cork City Council came on board with their support.

Cork City Council has banned the use of herbicides throughout the entire city.

More and more we are being made aware of the benefits of doing so in other countries.

And now, since Cork City Council banned the use of herbicides the difference has been immense. Estates too have come on board and their contractors have stopped spraying. The difference is unmistakable. Verges are growing and the grass is looking healthier. The grass throughout the estates and the town look stronger. Verges are growing back with healthier. Alternative methods are being used, methods that are safer for our community, for our wildlife.

We are grateful for your support. Well done to all who have come on board so far.
However, there are some areas that have not yet stopped using herbicides. Please know that herbicides are banned.

On Tuesday night despite the rain, our volunteers were out in force. They tackled the flower bed surrounding the statue at Poulavone. This was cleared in preparation for replanting.

Three Volunteers did a fantastic job on Wednesday evening. They planted approximately 50 pollinators around the statue.

While others tackled the statue flowerbed during Tuesday’s work night some Volunteers cleaned around both the ‘Ballincollig’ sign and the very popular seat that overlooks the roundabout. There is still a bit of work to do here which we hope to complete shortly.

On Saturday morning before the rain came, BTT Volunteers managed to get the grass on the Poulavone Roundabout cut. The rain beat us leaving a little strip left uncut. Previously cut grass was also gathered. When this strip is cut, we will be cutting less frequently.

The roundabout is beginning to look good.

This week the blanks on the flowerbed outside the Rugby Club at Tanner Park were filled in with the additional planting of pollinator plants.

Earlier in the week Adrian tidied the flowerbed at Cleburne Mews and on Friday additional pollinators which will brighten the area were planted. This is a new addition to our Pollinator Corridor.

On Saturday the ‘happy folk’ living at the allotment were planted with some lovely flowers. They certainly brighten up the place.

On Sunday morning our Volunteers came across the remains of a substantial fire on Main Street. A large number of newspapers that were either delivered or left to be collected together with a large traffic cone, were set alight on Saturday night.

Three of our Volunteers cleaned up the entire mess and removed the remnants.

Sad to see such mindless damage on the main street of our beautiful town. Hopefully those responsible will be punished. 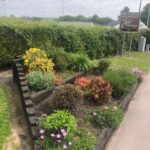 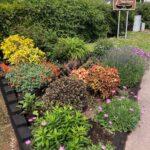 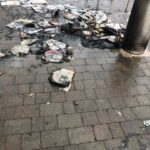 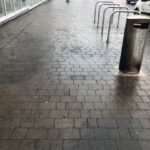 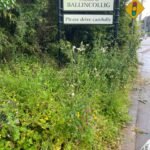 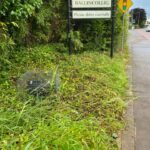 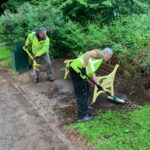 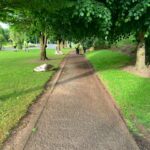 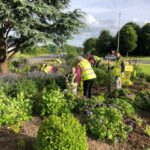 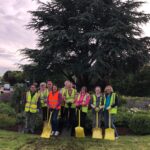 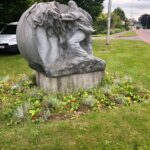 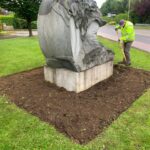 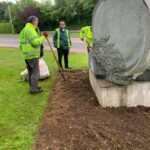 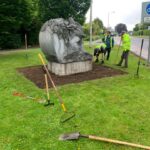 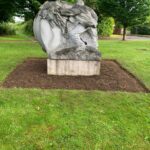 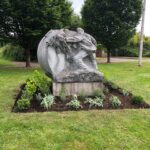 On Sunday morning despite the heavy rain some of our Volunteers carried out a litter pick albeit covering a smaller area.

Three Volunteers collected the burned newspapers and traffic cone that were set alight at the litter bin on the footpath outside Tesco. In total six bags were filled with the burnt items.

During the week as is usual litter picks were carried out by some Volunteers. The litter collected was added to Sunday’s total and this was then segregated on Monday at the allotment.