Date For Your Diary

Our Annual Awards night will take place on Friday 11th October, 2019 in The Oriel House Hotel. The event will commence at 8pm and will be preceded by a Drinks Reception at 7.30pm. This is a very big social event for our community and will be attended by over 300 people

Unfortunately, because of our ‘No Spray’ policy, there is a knock-on effect that the weeds keep coming back. This is especially the case around the Hydrangeas and Heathers planted at Carrigrohane.

On Thursday morning VMware staff Jess and Ciara had volunteered to assist us and, along with our CE / TUS workers Dylan, Adrian and Luke, they removed 30 Bags of weeds from around the plants. The difference is so noticeable, and it cleans up the whole area. It might be a lot of work but its much better than using a weed killer.

Once again, we are indebted to the VMware staff and to our CE / TUS workers for their continued great work. 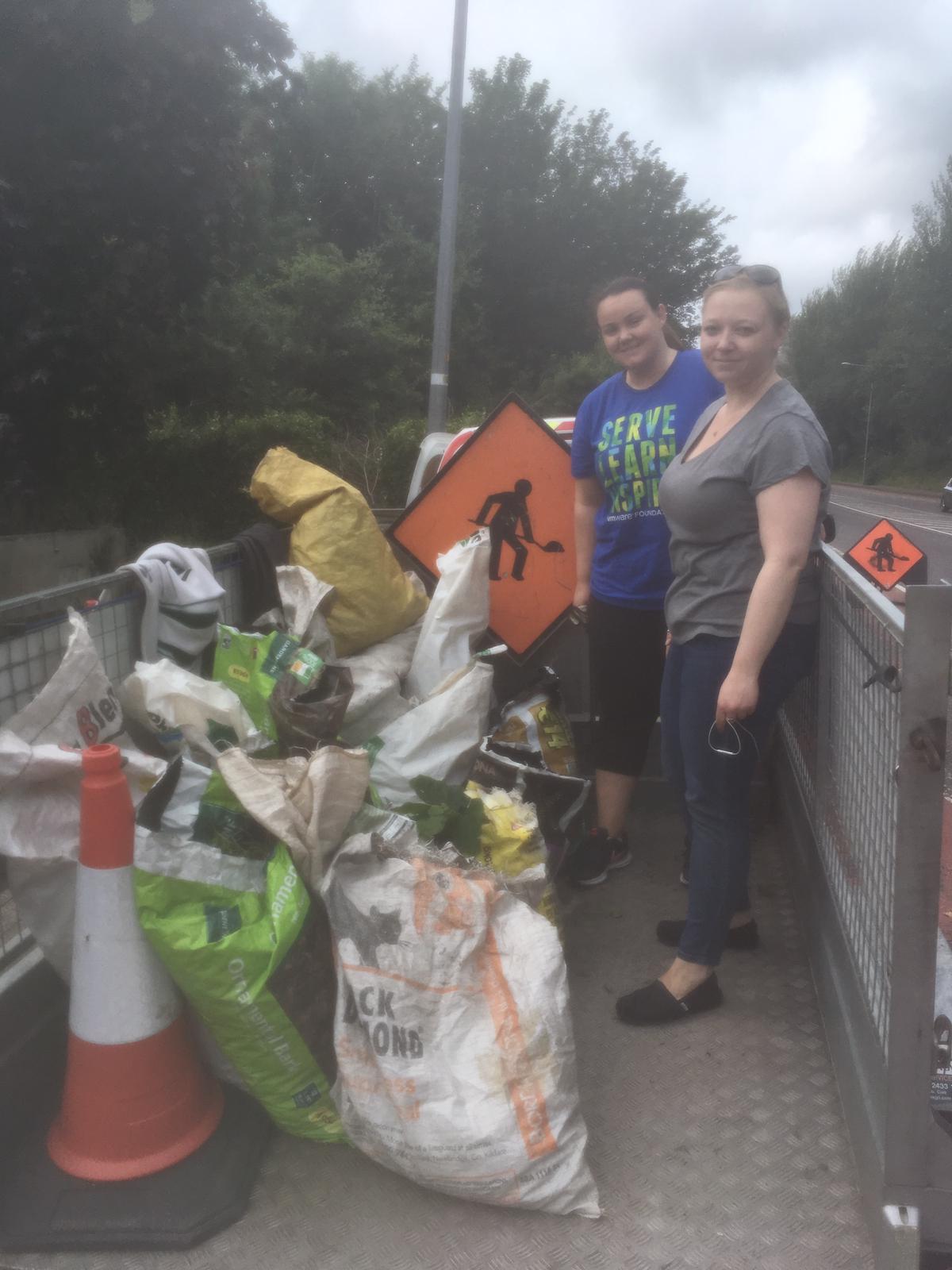 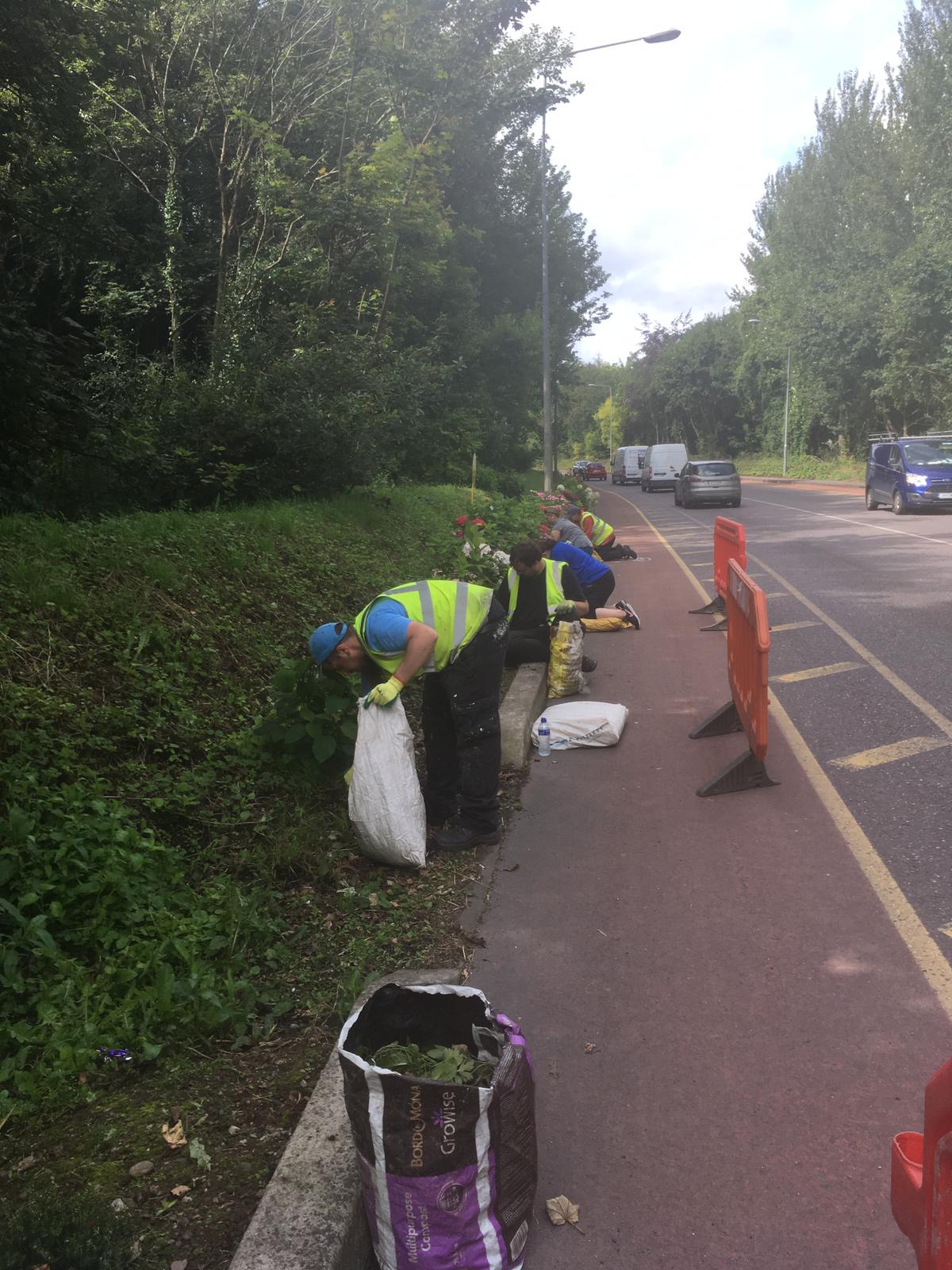 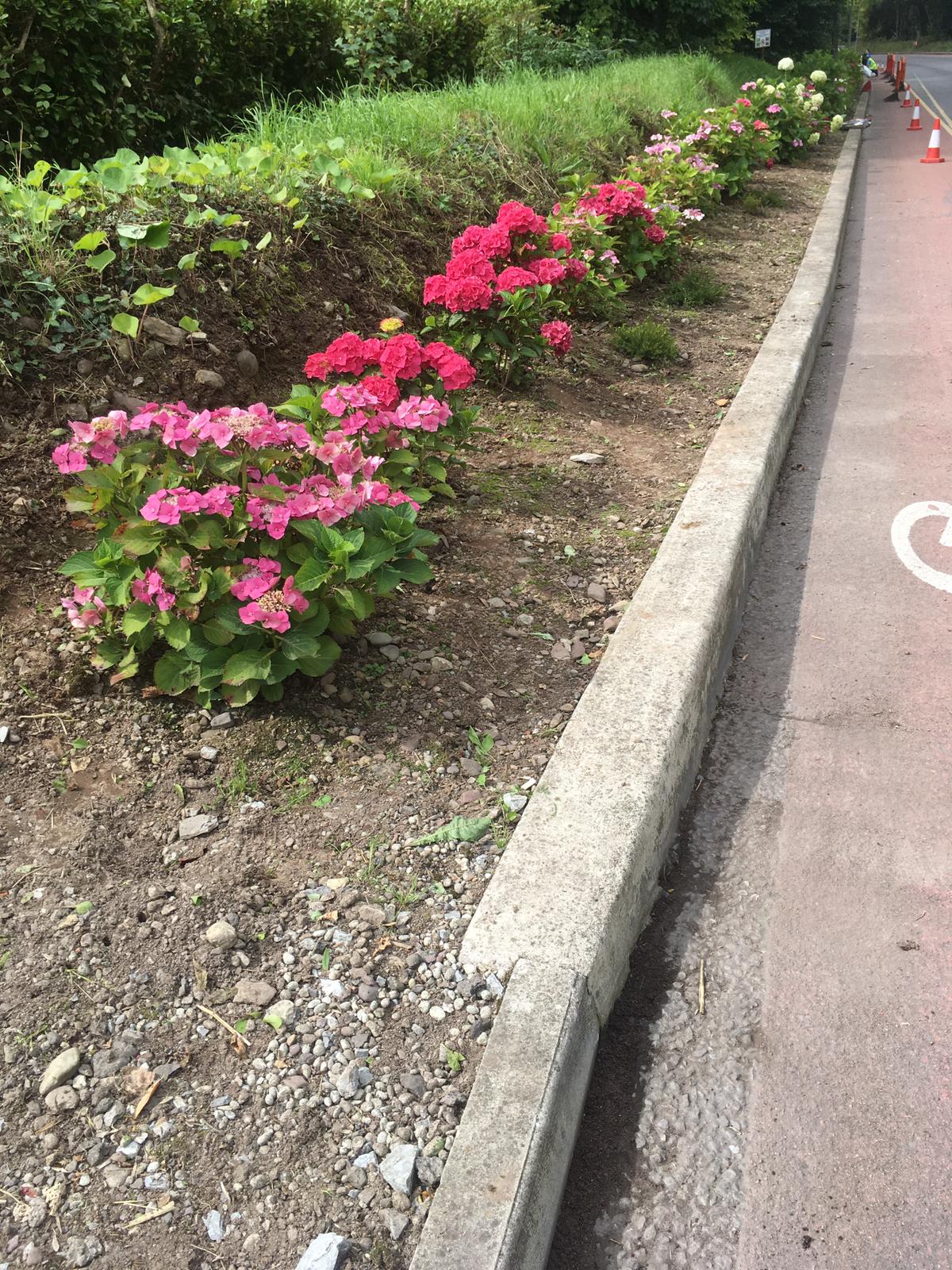 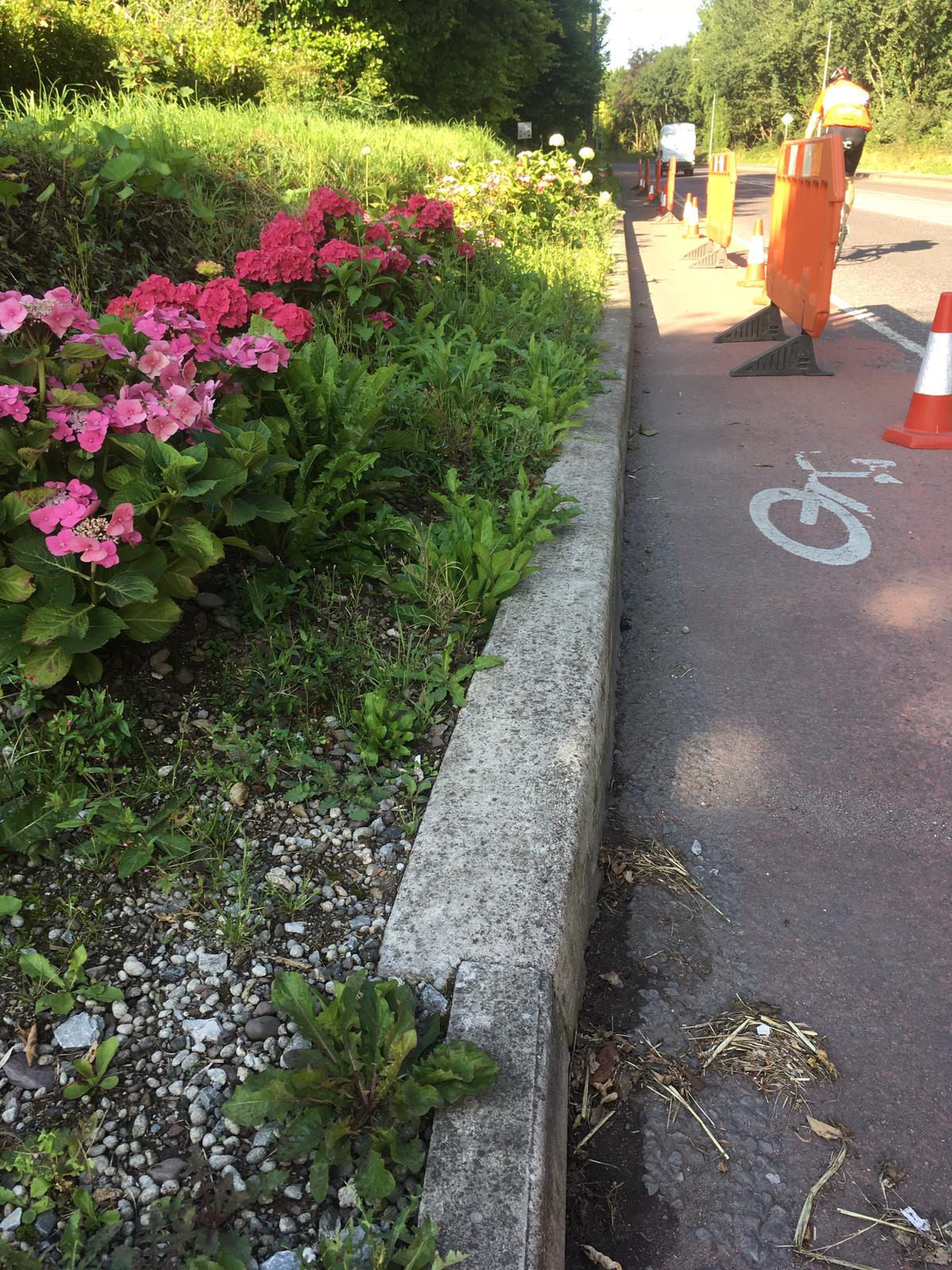 Our forward planning choosing and planting the correct pollinator plants this year is really paying dividends. A lovely selection of butterflies have been seen over the summer and bees are very plentiful. 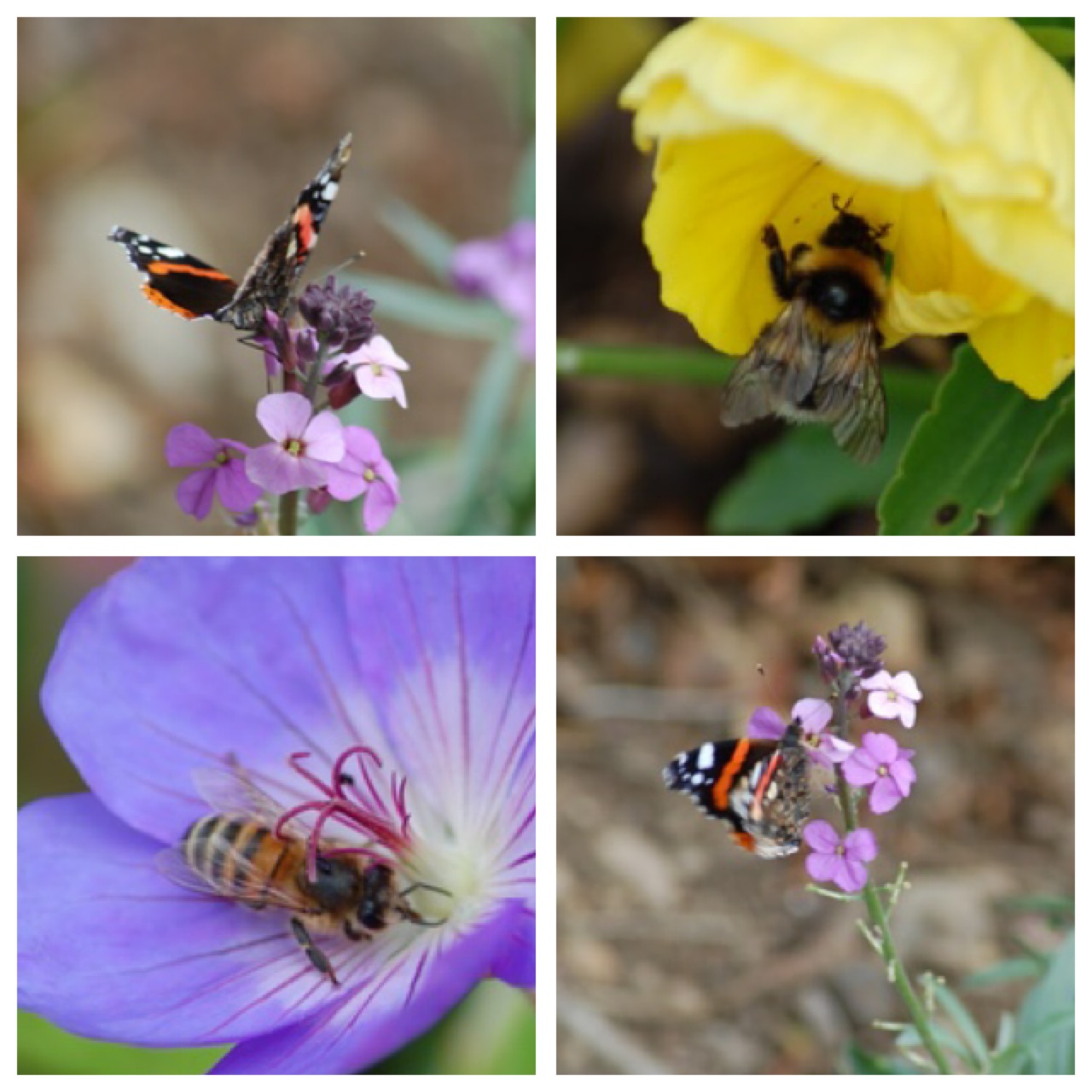 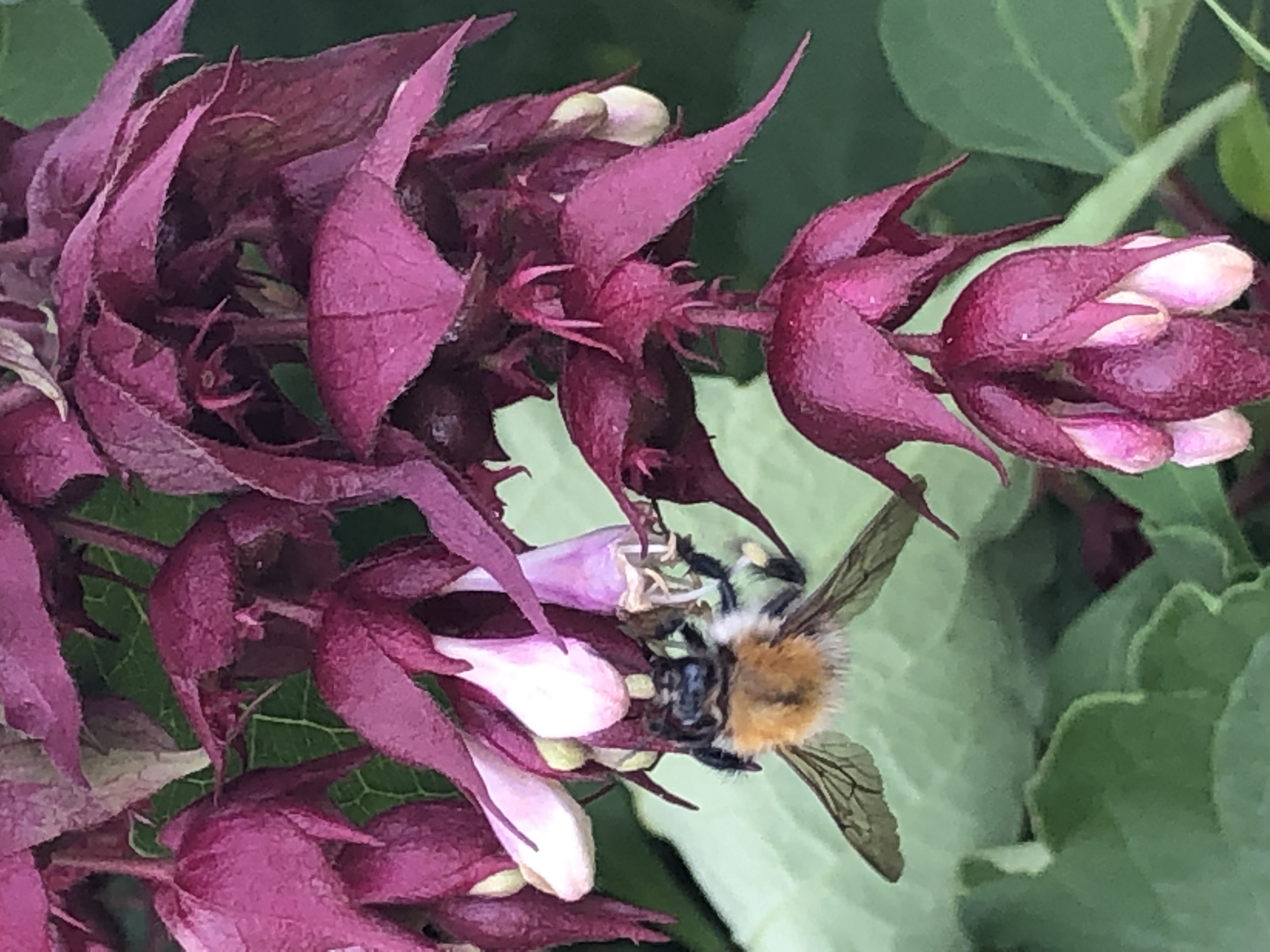 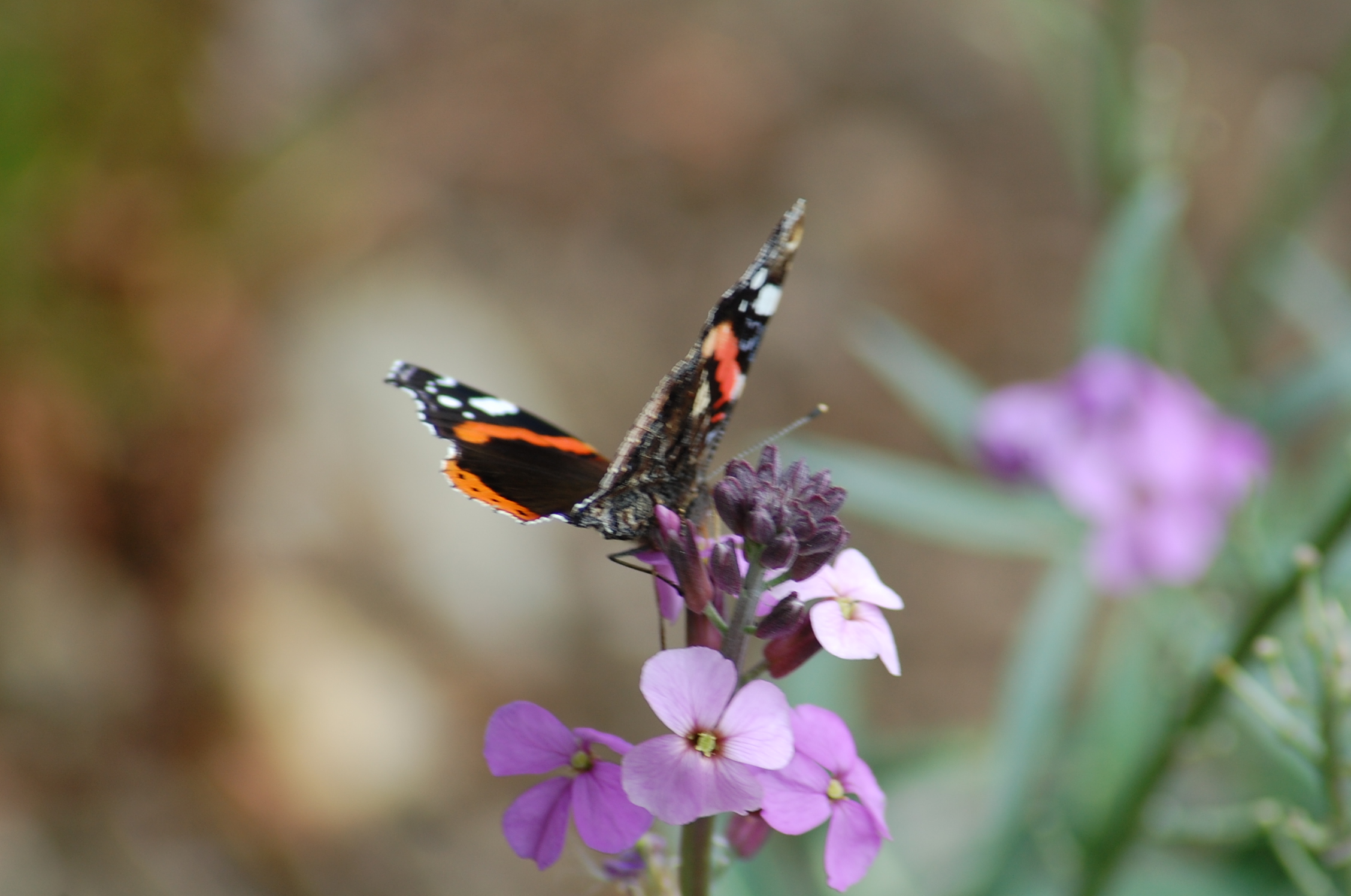 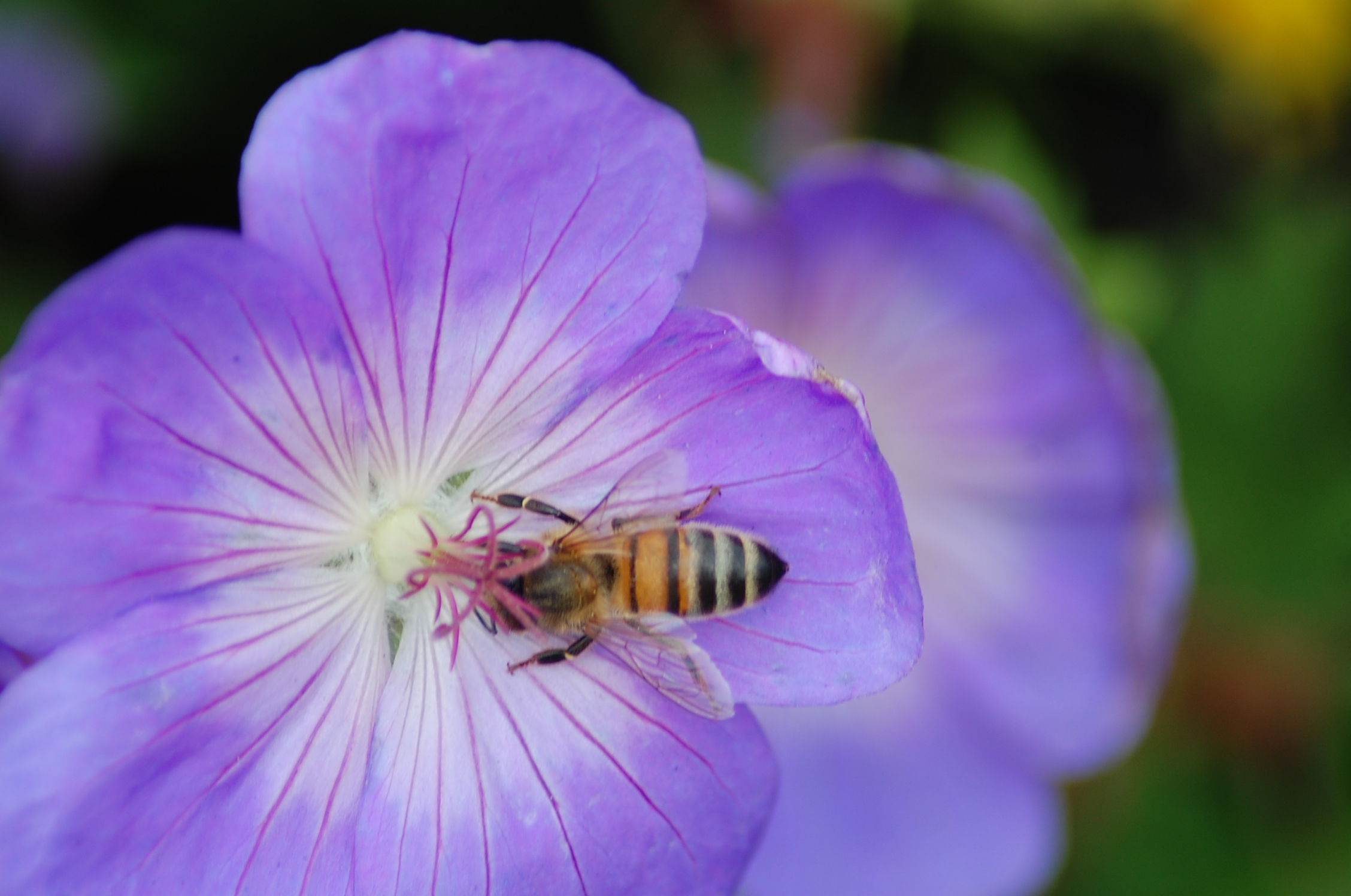 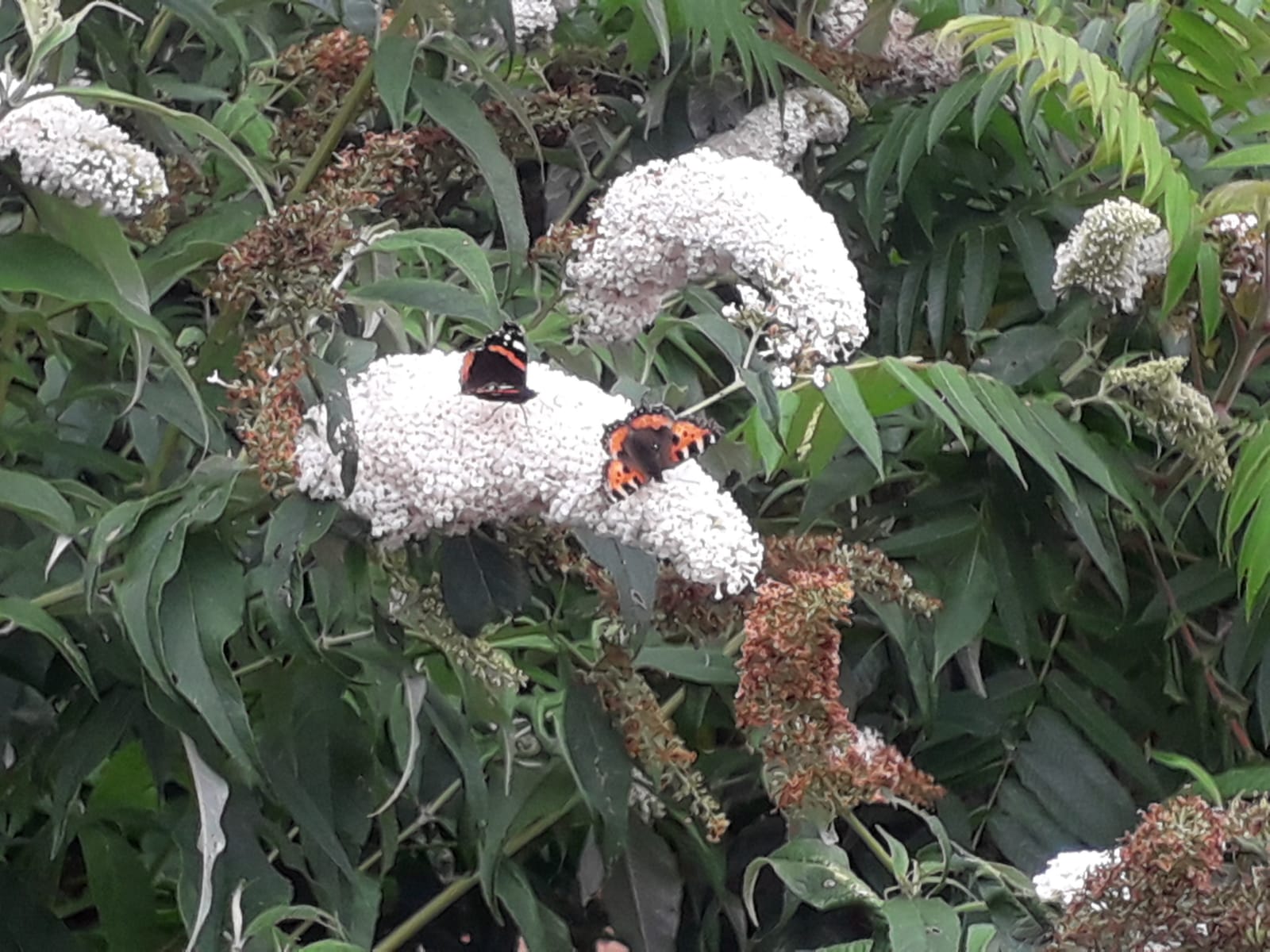 Last Thursday once again some staff from VMWare volunteered their time to help Ballincollig Tidy Towns.

In the space of two hours their efforts made a big difference. They cleared away the weeds from around the Hydrangeas and Heathers on the road from Carrigrohane to Poulavone. 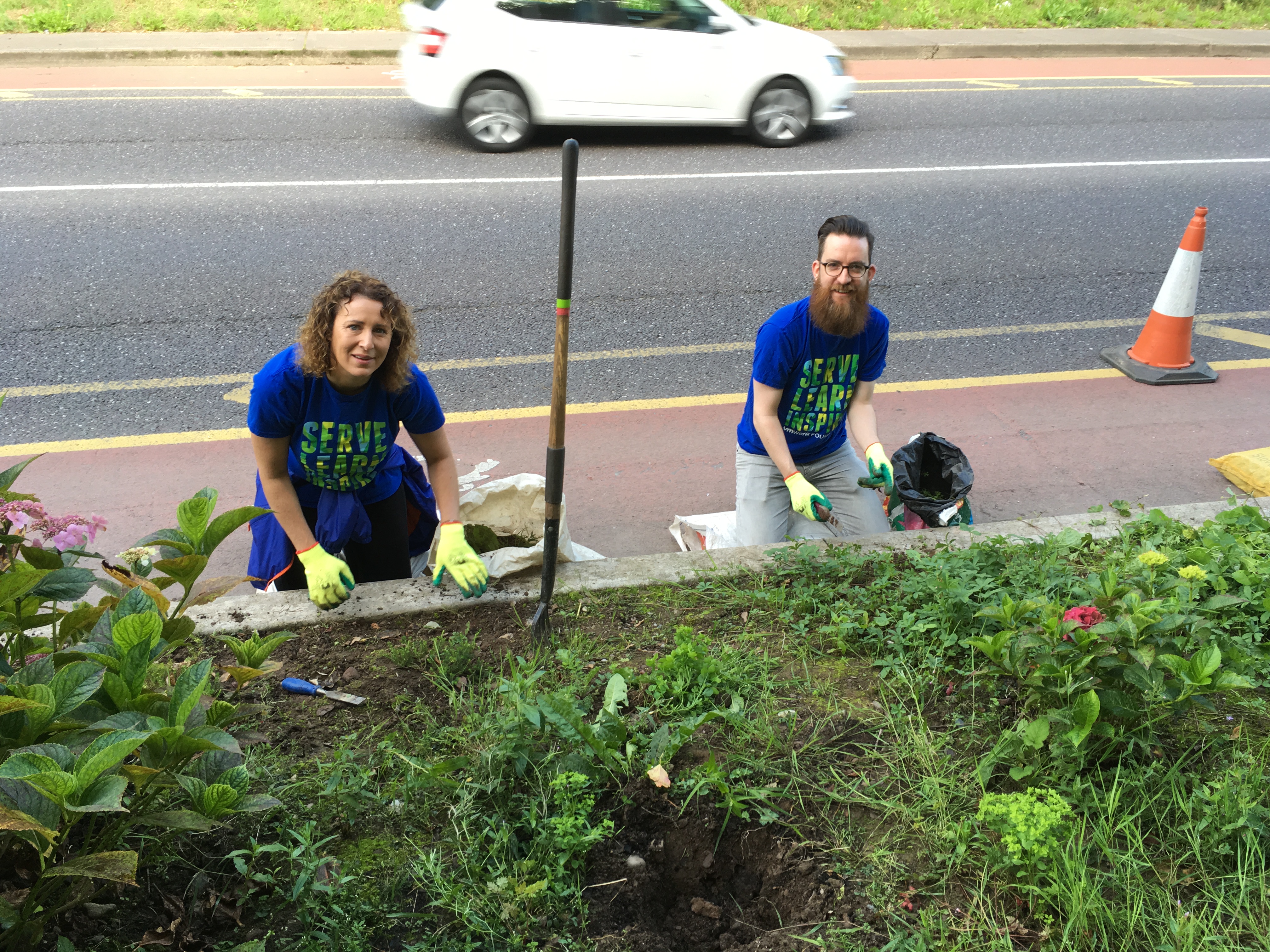 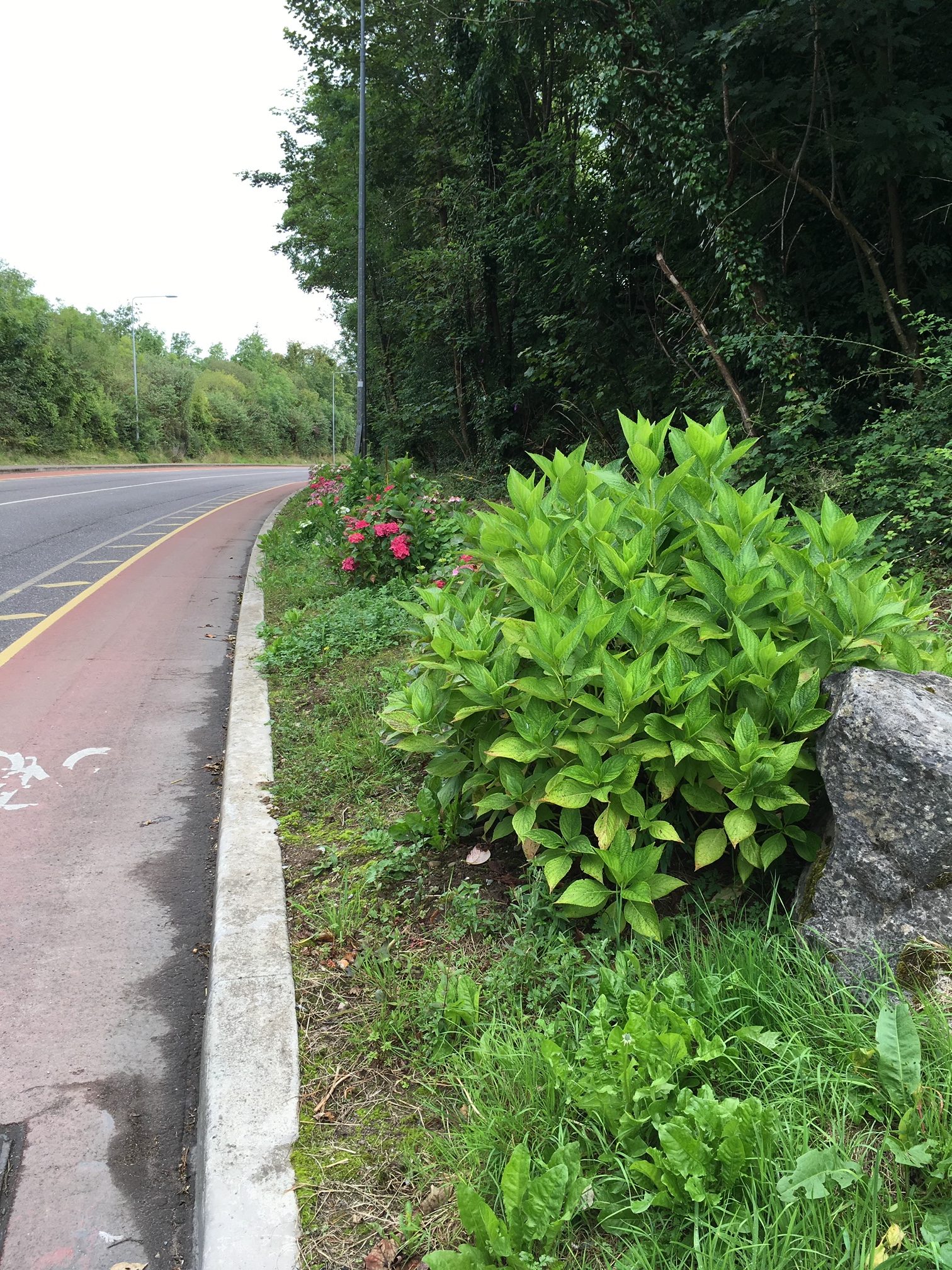 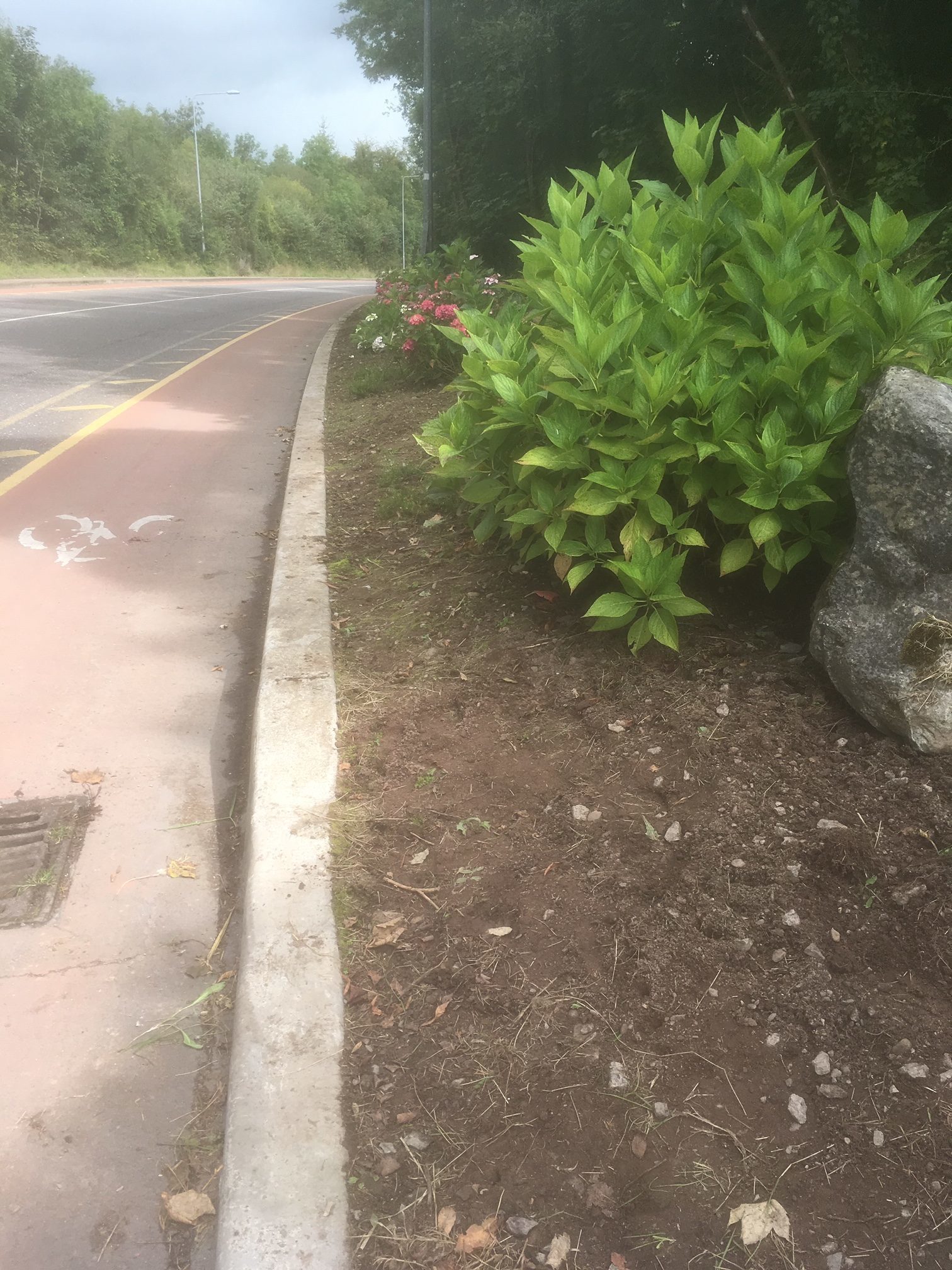 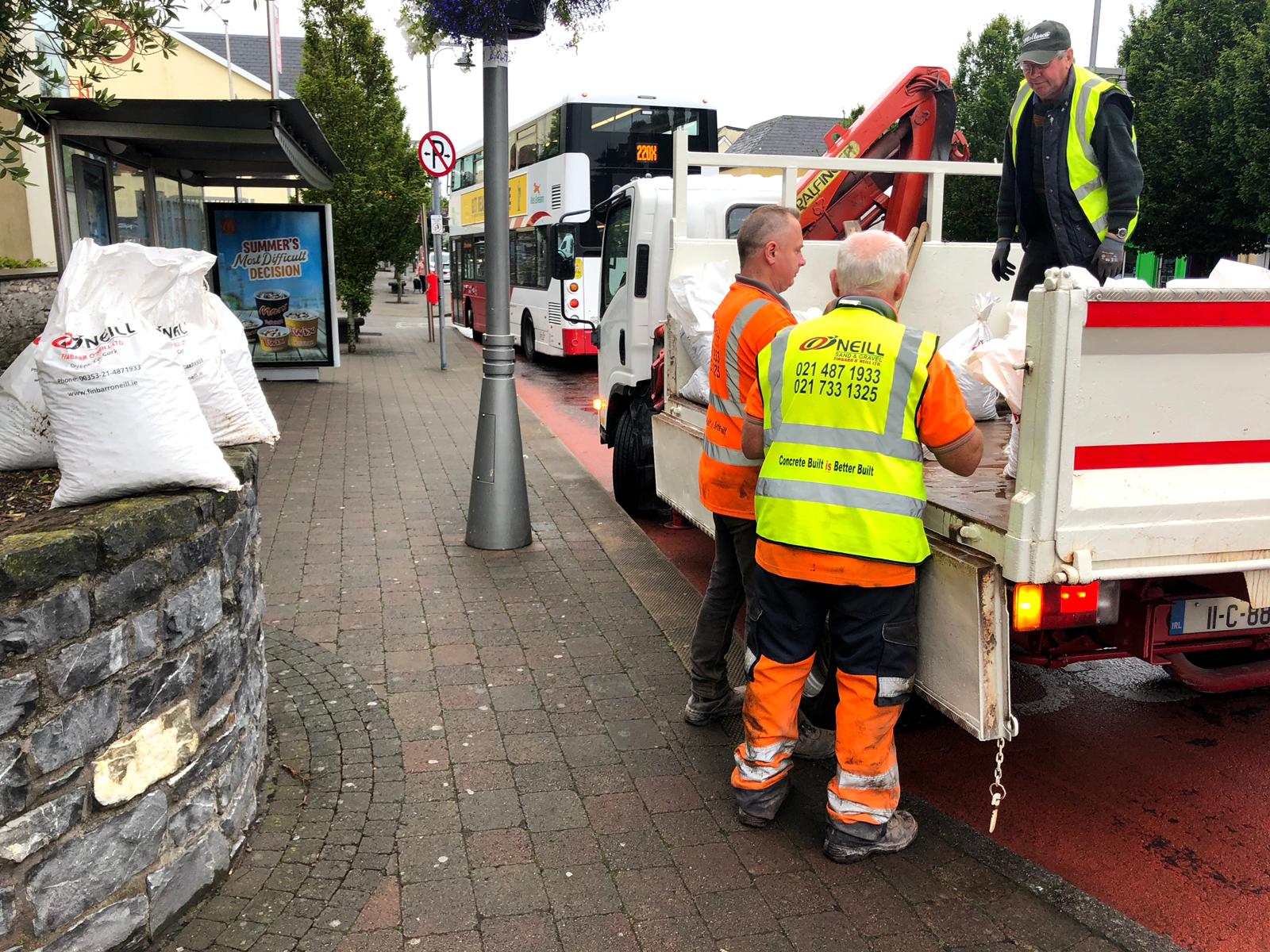 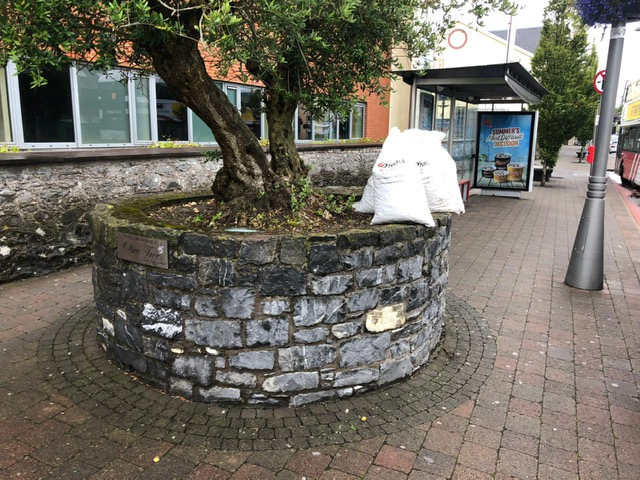 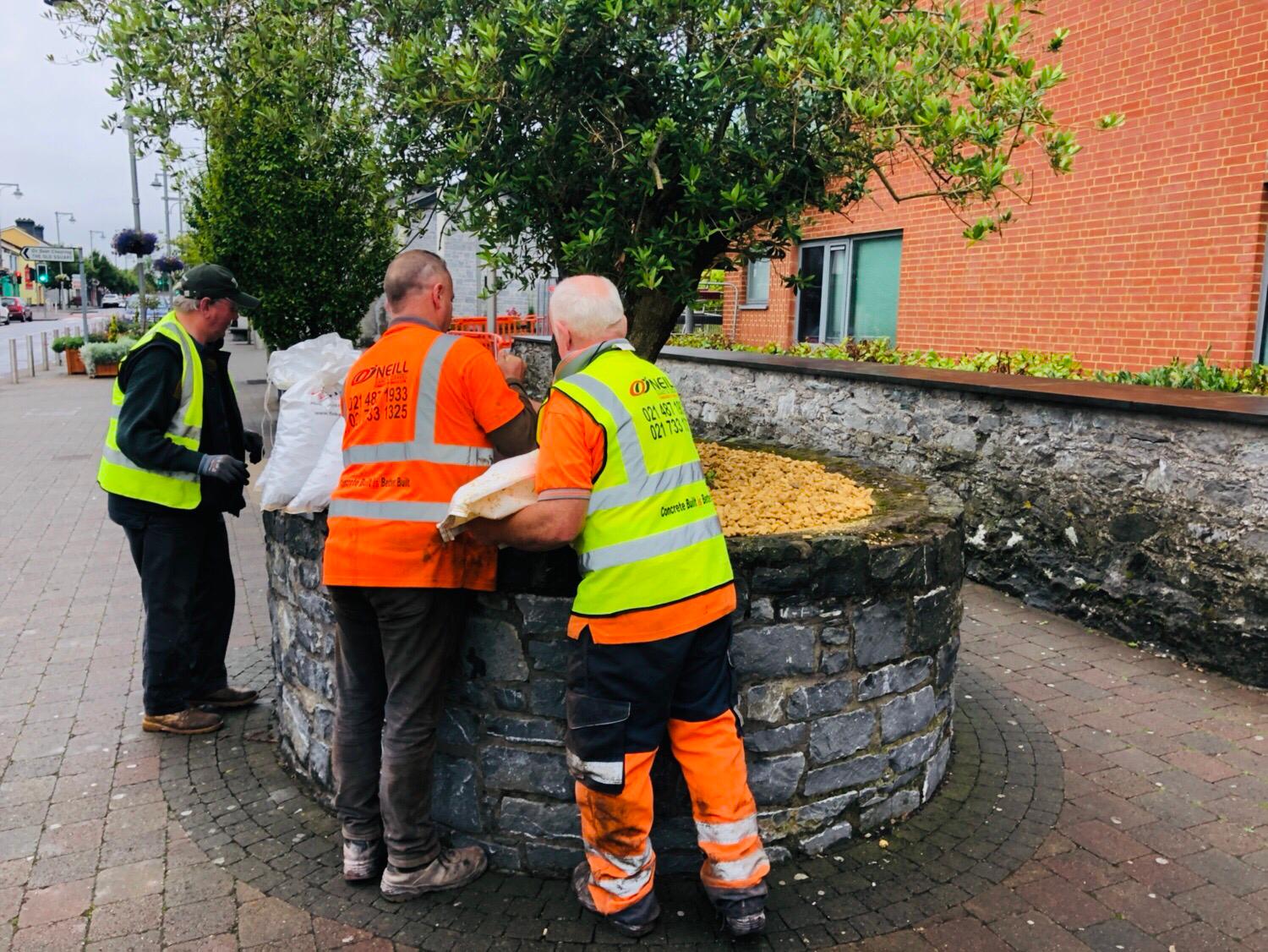 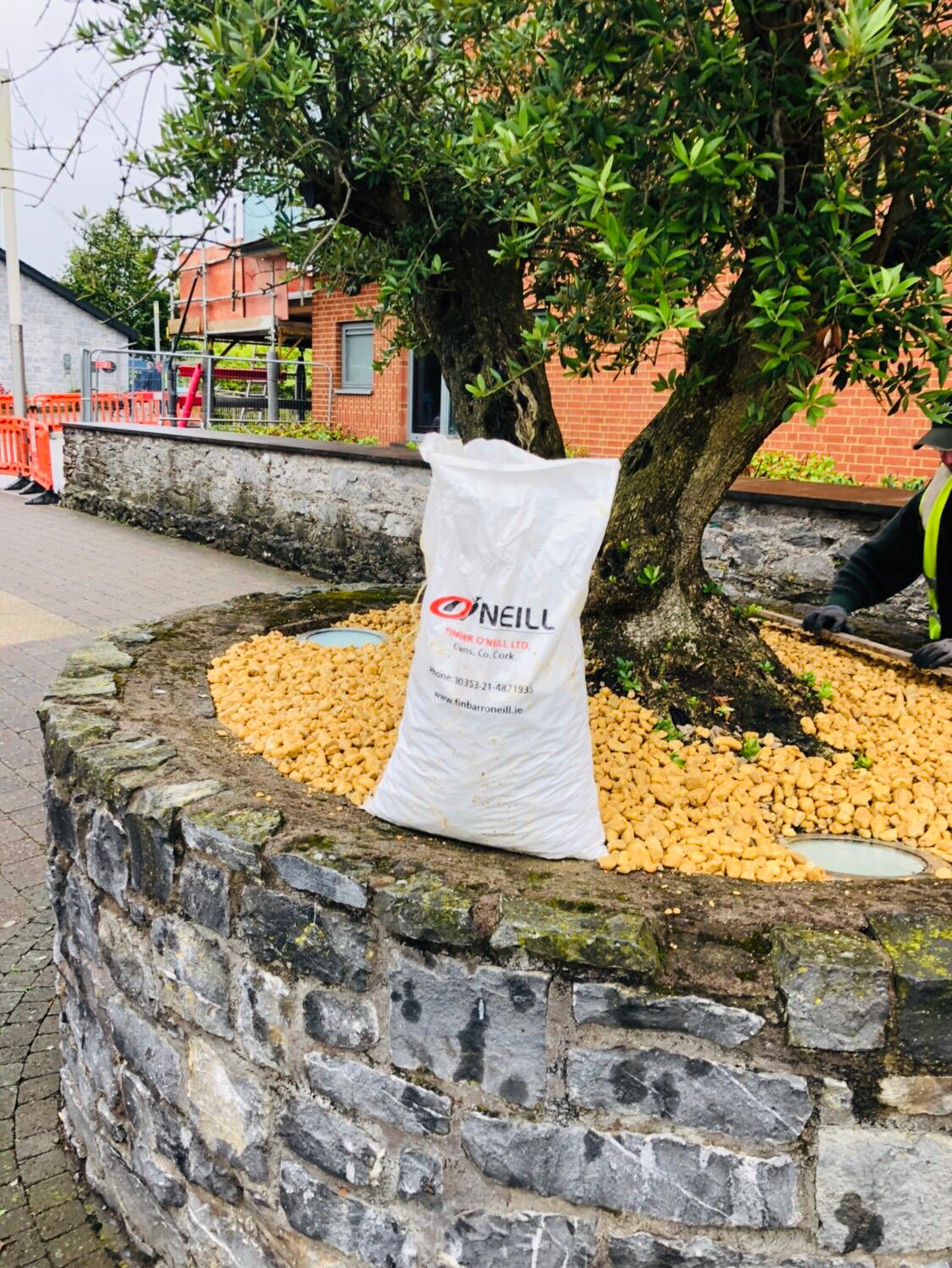 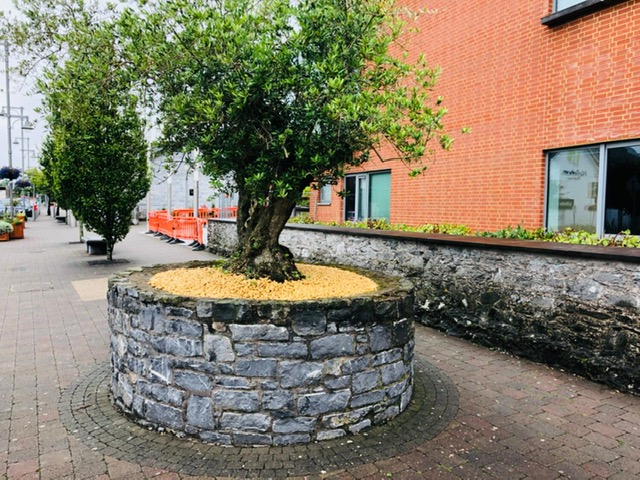 During one of our Work Nights some Volunteers were cleaning around the base of The Olive Tree on Main Street and felt that it might look better with some stones around it.

We contacted Finbarr O’Neill and he came up with an idea. He arranged samples of various stone but one in particular that gave a Mediterranean feel and would compliment this special tree on Main Street.

Our sincere thanks to Finbarr O’Neill Sand and Gravel for their continued commitment to the Community of Ballincollig. 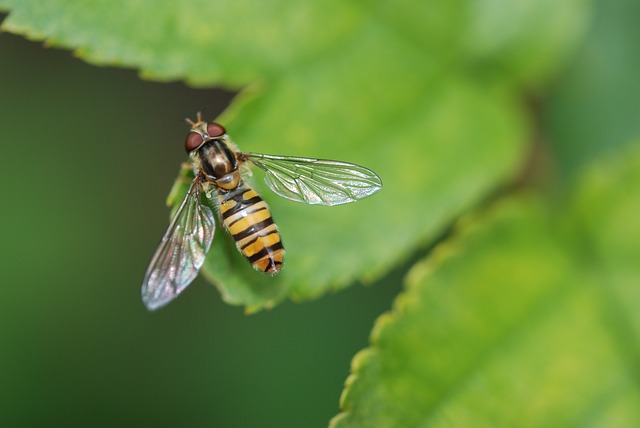 August is the time of year when people start to ask ‘what’s the point of wasps?’ The answer may surprise you.

Did you know that there are approximately 9,000 species of wasp here in the UK? These include the parasitic wasps, some of which are so diminutive they are like pin heads. Of the 250 larger wasps which have have a stinger, the majority are solitary and cause no upset to humans.

However, when we talk about wasps, we’re almost certainly referring to the our nation’s nemesis, the Common wasp (Vespula vulgaris). To understand why these wasps become really annoying this time of year, you first need to understand their life cycle.

Common wasps live socially like bees but, unlike honey bees, they haven’t evolved a way of storing food to allow the colony to survive the winter. In fact the only survivors are the young, fertilised queens who hibernate over winter. They emerge in the spring to build little walnut sized nests where they they lay around 20 eggs.

The queen feeds the resulting larvae until around May, when they mature and become workers. Then she focuses on more egg-laying and the workers get on with feeding them, enlarging the nest as they go along. By this time of year the nest has grown to around 40cm in diameter, often larger, and that nest can contains up to 10,000 wasps!

Then, in late August and September, a dramatic change takes place. The queen quits her egg laying (save a few that will go on to be future queens and males to fertilise them) and no longer releases the pheromone that causes the workers to work.

Basically, these workers are made redundant, and are left jobless and disorientated. And the problem for us is that, although adult wasps are insect predators, that meat is to feed the larvae not themselves. In their adult state wasps are not able to digest solid food and need sugary liquid to survive. Now, with fewer no larvae to feed, they become uncontrollably and insatiably hungry.

Wasps love easy food such as over ripe fruit and your fizzy drinks. Towards the end of their brief lives, their hunger drives them to search for easy sugar at exactly the time when we are more likely to be using our gardens and outdoor spaces for eating sweet things. The timing couldn’t be better for them or worse for us.

So why are those who panic and try to swat them away more likely to be stung than those who remain calm?

Well the problem is that these redundant workers have their own pheromone, which helps protect the nest from attack earlier in the year, and that’s essentially a chemical rallying cry to other workers that the nest is under attack.

So when you swat that annoying wasp and it feels under attack, that rallying cry will go out. Suddenly it all kicks off, and loads more wasps will start arriving in aggressive ‘red-mist’ mode, fired up and ready to defend their nest. This is why the best advice is to stay calm.

Think of it this way, from May that wasp has been working its socks off helping to keep things nice on planet earth. Now it’s going to die. So why not give it a break, save your swats, put a bowl of sugary drink somewhere out of your way, and let it go out on a nice sugar rush 🙂 At the very least don’t kill it.

What’s the point of wasps? Without them it’s likely that human life would not survive because, in the absence of their role as predators, our planet would be overrun by even more damaging insects such as aphids, ants and caterpillars.