SO MUCH GOING ON

This week is Clean Air Week. The week-long event is the newest campaign from the Green-Schools Travel Programme and is focused on raising awareness of, and taking action on, air pollution at the school gates.

Following a study carried out in spring 2019 in partnership with schools and the international Globe Programme, students discovered that nitrogen dioxide NO2 levels were higher for schools situated in major towns and cities when compared to schools located in rural areas. This can be attributed to traffic at the school gates as well as idling engines from cars and buses.

Green-Schools are asking students to make a pledge to #BeatAirPollution in order to create a healthy environment around the school gate and to improve well-being by travelling to school actively.

Why are we focusing on air pollution?  Nitrogen oxides – or NOx – are the gases nitrogen oxide (NO2) and nitrogen dioxide (NO2). Both of these pollutants are emitted when petrol or diesel is burned in internal combustion engines (cars/buses/taxis). NO2 has a negative impact on our health with 1 in 5 children experiencing asthma at some stage, and the main source of NO2 in Ireland is from road transport.

On Sunday we had twenty five Volunteers and eight Transition Year students out for the Sunday Litter Pick. Twenty five bags of unsorted litter, one bag each of cans, plastic and glass were collected from all the usual areas. Daily Litter Picks were also carried out along the Main Street during the week. 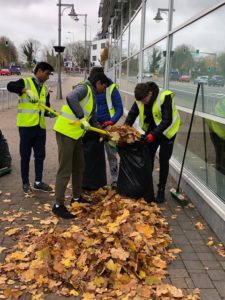 A number of our Volunteers attended first rehearsals at Gaelscoil Ui Riordain on Tuesday last. These were for a programme being filmed for TG4. It was a
very busy and exciting day for all involved. The budding film stars are looking forward to the next session which will involve TG4 out on the streets with students from Gaelscoil Ui Riordan and Volunteers from Ballincollig Tidy Towns.

Cork city’s boundaries were extended in June 2019, adding 85,000 new residents to the city. The first extension of the city boundary in over 50 years sees Ballincollig, Glanmire, Douglas, Frankfield,Grange, Blarney, Tower and Whites Cross become part of the city. Cork will be home to over 210,000 people and it is projected that the city’s
population will continue to grow over the next 20 years reaching over 350,000 by 2040.

This EcCoWeLL Event will provide an opportunity to hear from organisations in the new city working in the areas of Health,Environment, Economic Development, Social Inclusion, Education / Learning and Cultural Development. All inputs will be from organisations and projects in the newly expanded area in terms of best practice and innovative approaches that can be replicated or inform future planning and policy for this larger city.

The past week was another busy week for the group. Leaves were gathered from many locations around the town. But there were also many other jobs done.

Six bags were collected from Barry’s Road and dropped off at Poulavone.

Leaves were also collected at Innishmore, Greenfields and opposite Leo Murphy Terrace and Barrys Road.

The footpath was swept of leaves from the Allotment to Innishmore Cross & opposite Maxol.

From the footpath in front of Colaiste Cholm five ton bags of leaves were swept and removed. This job is not finished as we had to abandon it due to rain.

Thirty one black bags of leaves were collected from Elm walk Classis Lake.

John was kept busy working on the compost. Due to the levels of leaves being deposited it was necessary for him to move some of the volume already in the composting bay to the back of the bin.

Ann, one of the Volunteers, was working on maintaining the flower beds in the Allotment. The workers fenced off a lot of the grass and also the area in front of the tunnel, where bulbs had been planted.

Slabs were put down to form a (temporary) path where one was already in use.

Dylan painted all of the Aldi planters and Adrian checked all planters and replaced wicks where necessary. They are now ready for storage until next year.

Hope people are enjoying the FUN FACTS. The information is so beautifully illustrated it makes it easy to retain. There are plenty more to come.

Our Snippets blog is back so make sure you dip into it for extra news.

In the coming weeks more Estates will feature on the website and of course we will keep introducing our Volunteers to you.

For these and more visit our website on www.ballincolligtidytowns.ie

On Saturday and Sunday last researchers from the Environmental Research Institute at University College Cork, assisted by researchers from Queen’s University Belfast, hosted a Workshop at the Kingsley Hotel to study the effects that Climate Change will have on Ballincollig from now to 2050. Pat Clarke represented Ballincollig Tidy Towns at this conference.

Led by Dr Gerard Mullally and Dr Alexandra Revez, their team of researchers are investigating what effects climate change will have on the lifestyle of communities throughout the country. Research is already in progress in Athlone and recently commenced in Ballincollig, with one as yet undecided coastal town to be researched.

It will seek to engage with the local communities , state organisations and other groups to investigate the challenges Ireland faces in tackling climate change and moving away from a carbon based society.

To assist in this research an online survey is being carried out at present to get your opinion on how these changes might affect the community. It would be greatly appreciated if people in Ballincollig  would go to the following link http//www.surveymonkey.com/r/8BJLGPP and give their opinion. It just takes 2 minutes and would greatly help the researchers.

We are always looking for new Volunteers and would appreciate any help that you can give. If you have some time to spare come join us on a Sunday morning at 11am. We meet at Quish’s SuperValu car park and will be delighted to see you.