THE WEEK IN TIDY TOWNS

Despite all the rain the Group got through an amount of work during the week. Winter flowers were collected and put in the Allotment. Rubbish was sorted. Clearing was done on the area around the steps from Westgate to BCS and bags of earth were collected There was a general tidy up in preparation for our visitors from Clonakilty Tidy Towns. Work was done in the Container rearranging shelves etc. to make room for the new lawnmower. Bindweed from the Beech hedge opposite the entrance to Coolroe Heights was removed.Traffic islands in front of Quish’s were cleaned. And once again John worked his usual magic on Barry’s Road clearing the area and filling tonne bags. 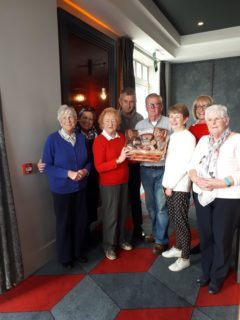 Members from Clonakilty Tidy Towns paid a visit  to Ballincollig and some Volunteers from Ballincollig Tidy Towns showed them around the town. They presented BTT with a beautiful hamper of Clonakilty goodies. We hope they enjoyed their visit as we certainly enjoyed spending time with them and were proud to show them Ballincollig. 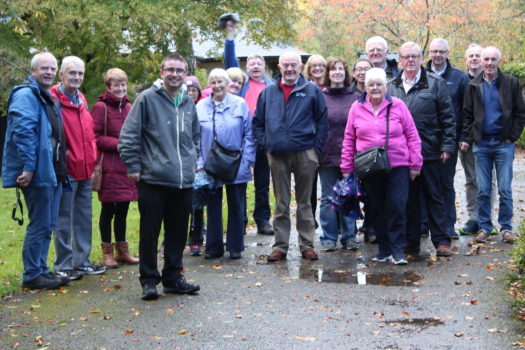 Last Saturday was the Annual Volunteers Day Out and it began with breakfast in the Oriel House Hotel. We headed for the Kildare Village where some Volunteers indulged in a little retail therapy. Others took advantage of this stop off to watch the Irish Rugby match in the Silken Thomas bar. From there it was on to a tour of the Japanese Gardens and the National Stud.  The return trip took in a stop at the Horse and Jockey and finally it was back to the Oriel House Hotel where BTT had arranged for an ‘Irish Barbecue’. The day was a great success and everyone enjoyed it.

Eight bags of leaves were also collected for compost..

Despite the recent rainfall, watering of the planters and flowers around Ballincollig continued. On Wednesday 600 litres of water was used. Three and a half hours was spent doing this very worthwhile work.

Several Estates have already been clearing up the fallen leaves from around their areas. This is essential for safety as they tend to become slippery and can be dangerous when wet and left on the ground to rot. The leaves can be taken and disposed of  on the compost heap in the Allotment. We are encouraging more Estates to come out and clear their leaves in the coming weeks.

Our website is updated every day and we are writing some informative and explanatory blogs on Biodiversity that will be of interest to the community especially as Ballincollig is now a ‘spray free’ town. All this information and more is already available on our ‘Biodiversity Page’..

We have recently added some lovely old photos to our ‘Ballincollig Past’ page so make sure you have a look. If you have some photos you would like to share on this page, please drop them to us or hand them to Tom Butler on Sunday during the teas and coffees.

We are always looking for more Volunteers to join Ballincollig Tidy Towns. So why not come on our Sunday Litter Pick. We meet at 11 am at Quish’s SuperValu West End.