Last Sunday, the 14th July, twenty six Volunteers were out for the weekly Litter Pick.  It was a perfect sunny morning and in the hour we collected seven bags of litter and two of recyclables.  In a litter pick outside the adjudication boundary a kilometre of roadway yielded less than a half bag of litter.  During the previous week Volunteers were active litter picking each day collecting three bags of waste and three of recyclable materials. 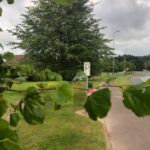 The fine weather allowed for more grass cutting and edge strimming to be undertaken.  Trees were cleared of low growth in Coolroe Meadows. Volunteers from VMware assisted the group in some of the work that was being undertaken. More works were completed at the Allotment which also included waste sorting and composting. Finally another painting job was completed at the West End area.

The total Volunteers for the Tuesday and Thursday Work Nights was over twenty.  More than thirty hours were put in on a number of projects. Kerbs were cleared in several areas in the Town Centre and on Maglin Road. Trees with low branches were tidied and more kerb painting was also done. Some Volunteers were litter picking and a larger group cleared the last of the kerbside weeds on Greenfields Road.

Watering the flower baskets continued and five Volunteers were involved over a number of days last week. An information panel in the Regional Park received a makeover to bring it back to first day condition. Judging in the BTT Local Estate Competition has commenced and will be completed over the next couple of weeks.

Ballincollig Tidy Towns joined forces with Ballinora Tidy Towns on Tuesday 16th July for a joint work night project. A total of twenty or so volunteers in the combined team blitzed the kerbside weeds and verges on the overpass on Maglin Road. It was amazing what a large group could achieve in an hour and a half. Their efforts compliment the work done by residents of the area the previous Sunday when verges and walls were cleared. 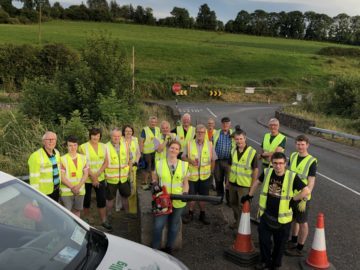 If you are interested in joining us any Sunday just come along to Quish’s SuperValu West End where we meet up at 11.00 am for our weekly Litter Pick. If you have an hour or two free on a Tuesday and/or Thursday we would appreciate your help. We meet at 7 pm outside AIB on Main Street.