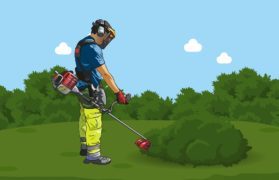 As outlined in the Chairman’s Awards Night speech, Ballincollig Tidy Towns is banning the use of sprays throughout the town with the help and support of Cork City Council, local organisations and residents.

We as a community must come together on this issue and learn the importance of doing our bit for Biodiversity. Check out the Biodiversity page on the Ballincollig Tidy Towns website  www.ballincolligtidytowns.ie  Look out for our short informative blogs we hope will help educate young and old alike on Biodiversity and on how important it is that we care for and protect the environment.

In the Adjudication Report, also available for reading on our website, Ballincollig was penalised for the use of sprays in the town and lost vital marks in the SuperValu National Tidy Towns Competition. Therefore, it is imperative that work is done  to change this immediately.

Going forward Ballincollig Tidy Towns website will also put together some alternatives to spraying and we will take a look at other countries and how they have changed their methods.. With everyone’s support Ballincollig will become a ‘Spray Free’ Town.

Last Friday night was our Annual Awards night. Almost two hundred and fifty people attended the Oriel House Hotel. In his annual speech the Chairman, Tom Butler, outlined Ballincollig Tidy Towns’activities and achievements of the past twelve months and plans for the coming year.

He emphasised that the night was also a celebration of our success in the SuperValu National Tidy Towns Competition. Ballincollig won its eight Gold Medal and the County Award. With Ballincollig having become part of the City in the past few months, special thanks was given to Cork County Council for all they had done for the Town and a welcome was extended to the City Council.

The Chairman’s speech along with all award winners are available on our website www.ballincolligtidytowns.ie

Sunday 13th October a total of thirty eight people turned out for the weekly Litter Pick. This included ten Transition Year students and also Brid our newest Volunteer. The student representation grew by three, Jonah, Conor and Lorcan. The total number of bags collected was fourteen, four of which were segregated for recycling. During the week previous a number of Volunteers litter picked each day. They collected five bags in total, two of those segregated for recycling. 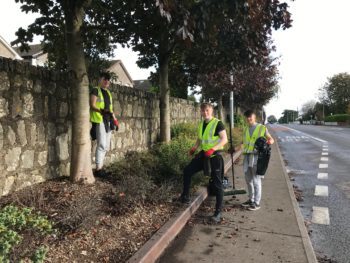 Some of the Transition Year students from the Sunday group cleared leaves from Westgate to Innishmore Junction. Six bags were collected and went directly to the composter in the Allotment.

Waste bag collection, segregation and maintaining the compost heaps were among the work tackled during the week by this group.  Early in the week edging grass margins continued on Community Drive and a concrete base was prepared for the next seat on the Walking Routes. 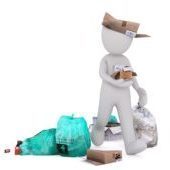 Two Volunteers put in four hours watering and caring for the  planters on Main Street. The flowers in the railing planters in particular are still quite strong and should last a few more weeks.

It was great to see that some estates have been clearing the leaves from around their area..This definitely helps to alleviate flooding issues especially as we have been experiencing quite heavy rainfall recently.

Special Birthday Wishes go out to  ‘The Two Amigos’ Eoin Mohally and Gay Holden who celebrated their birthdays recently. Thanks to the Oriel House Hotel who presented them with two lovely birthday plates during the tea and coffee meet after the Sunday morning Litter Pick.

Always laughing and sharing a joke, they are normally seen together litter picking and also on the Tuesday and Thursday  Work Nights with their ‘Special Trolley’. 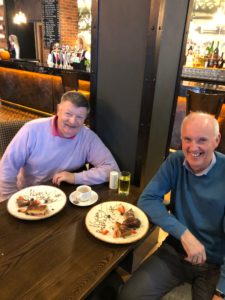 MAKE SURE YOU CHECK OUT THE BALLINCOLLIG TIDY TOWNS WEBSITE ON