Ballincollig is in a very lucky position to have several heritage areas within the town.  As a result of a joint initiative between Cork City Council and Ballincollig Tidy Towns, information signs highlight these areas. Ringfort on the Link Road is one such area. However, in the past few days, someone defaced this sign.

What a shame that some few carry out such mindless vandalism. It ruins things for everyone in the town. Thankfully, one of our Volunteers managed to remove the substance and clean it up like new.

Our heritage is of great importance and affording others the opportunity to learn about that heritage is vital. Perhaps those involved in this mindless vandalism could please stop. You are ruining it for everyone around you.

We had 20 Volunteers out on Sunday morning for the weekly litter pick. Because of such a good turnout we managed to cover a large area. Several of our Volunteers were also picking litter during the week.

When all the bags of litter were combined and eventually segregated, they yielded one bag of cans.

LGFA were also out litter picking and showing great community spirit. They collected two bags of litter for us.

As in previous years, Ballincollig Tidy Towns welcomes all Transition Year Students who wish to participate as part of the Gaisce Awards. Come join us every Sunday morning for the weekly litter pick. We meet at 11am in the car park at Quish’s SuperValu, West Village.

Looking forward to seeing you.

As autumn takes hold and leaves begin to fall our Volunteers and Workers have begun collecting bags of leaves which Residents have kindly gathered from their areas. This week Leo Murphy Terrace was one such area.

Monday evening the Waterboys spent two and three-quarter hours filling the reservoirs in all the planters. This included all window boxes, pole planters, tiered towers, the parklet and the planters at Eastgate. A total of one thousand litres of harvested rainwater were used.

You may have noticed that many of the flowers are beginning to fade. The weeks of hot weather followed by the torrential rain we experienced have proven too much.

Although many have been lost there is still some life in those remaining. An amazing amount of time and energy have gone into keeping the flowers as well as possible for as long as possible. And to be fair, we have been extremely lucky to reach October and to still have blooms. Great credit is due to both our watering and ‘dead heading’ crews for the incredible care and attention they gave over the summer months.

It has, however, come to our attention that people have been criticizing the planters at Eastgate. Perhaps those people would like to join us and give up their free time, as we all do, and help look after the planters. Maybe they can offer better ideas in caring for these flowers. Feel free to come join us and share your expertise.

Our Workers had a busy week concentrating on two areas in particular. They lopped suckers and branches from the trees in front of the Rugby Club. This resulted in 16 bags of green waste being removed.

They also removed 6 bags of edging from their work on Innishmore Lawn.

Carrigdene Residents were busy preparing for the winter months. The Residents of Coolroe Heights were also busy working on their Estate. Great credit is due to both these estates for the work that was carried out.

We collected 18 bags of grass cuttings and leaves from Carrigdene and 3 one-ton bags from Coolroe Heights. 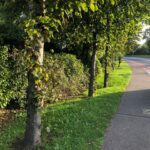 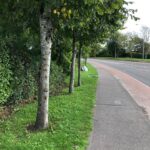 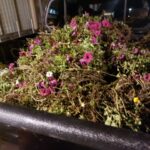 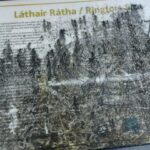 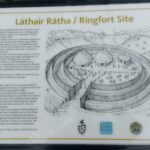